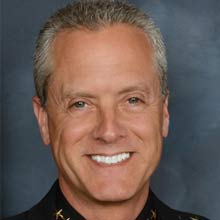 Serving as Vacaville’s Chief of Police since 2014, he oversaw the police department’s 179 sworn and civilian staff and a budget of $42.4 million. Carli utilized accumulated leave time to step back from active duty on February 23. Captain Ian Schmutzler assumed department leadership until an interim police chief is selected.

“I am thankful for having the privilege to work alongside the finest police officers and professional staff in what is truly an incredible community.”

His career started with Vacaville in 1989 where he spent his early years as a police officer patrolling the streets with his K9 partner, eventually serving as a field training officer and detective. Carli promoted to sergeant in 2003 and, over the next several years, supervised patrol teams, the Critical Incident Negotiation Team, K9 Unit, firearms instructors, police technology, and the Office of Professional Standards. In 2010, Carli promoted to lieutenant, where his progressive work in organizational transparency led Vacaville as an early adopter of body-worn cameras in policing. This gained national recognition by the US Department of Justice.

“It has been my honor to serve Vacaville all these years. I am thankful for having the privilege to work alongside the finest police officers and professional staff in what is truly an incredible community. I will sincerely miss being with such incredible staff,” said Chief Carli, “My family has called Vacaville home. Having raised our children and grandchildren here has reminded me how much I love this city and what has made Vacaville so special – its people.”

As an outspoken advocate for the law enforcement profession, Carli’s most relevant work focuses on national best practices in policing, technology, public policy, and officer safety and wellness. In 2016, Chief Carli was invited to the White House to meet with President Obama in the wake of national high profile policing events and civil unrest.

“Chief Carli has dedicated his career to Vacaville, and we thank him for his unwavering commitment to community safety,” noted Vacaville City Manager Aaron Busch. “He brought Vacaville several innovative approaches to public safety and has guided us through a challenging period with exemplary leadership. We wish him a satisfying and relaxing retirement.”

Carli formed the Community Response Unit focusing on quality of life and homeless issues, chairs the Vacaville Homeless Roundtable, and is outspoken in uniting community groups and faith-based organizations to address social issues. His creative approach to reducing homelessness was highlighted during a Police Executive Research Forum (PERF) national town-hall meeting focusing on “The Police Response to Homelessness.”

“Vacaville has been very well-served by Chief Carli for over three decades,” said Vacaville Mayor Ron Rowlett. “Chief Carli lives in our community, actively volunteers for a variety of causes, and has led our Police Department with honor. I have no doubt that he will continue to serve Vacaville well into the future.”

Recognizing the gap between officers in crisis and the need for early prevention strategies, Carli embarked on implementing a radical culture shift to create psychological resiliency within first responders. This preventive approach to promoting a culture of wellness led to development of a unique “Law Enforcement Wellness App” that is nationally-recognized. Under Carli’s leadership, the Vacaville Police Department was recognized as the 2020 top agency in the nation by the National Law Enforcement Officers Memorial Foundation, receiving the “Destination Zero” Officer Safety and Wellness award.

Chief Carli is an Executive Fellow with the National Police Foundation, focusing on the continuous improvement within the policing profession throughout his career. He represents the California Police Chief’s Association as the chair of the California Data Sharing Task Force, focusing on best practice strategies for law enforcement technology and information system sharing, and is a member of the California Attorney General’s Advisory Committee.