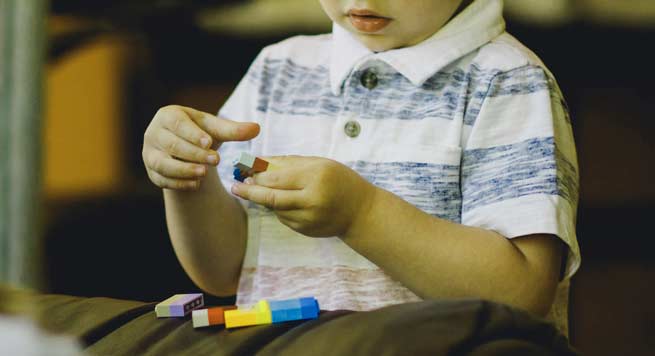 SACRAMENTO – A new study by UC Davis MIND Institute researchers suggests that executive control differences in autism spectrum disorder (ASD) may be the result of a unique approach, rather than an impairment.

The study suggests that adolescents with autism approached the task in a unique way.

Executive control difficulties are common in individuals with autism and are associated with challenges completing tasks and managing time. The study, published in Biological Psychiatry: Cognitive Neuroscience and Neuroimaging, sought to tease out whether these difficulties represent a disruption in proactive executive control (engaged and maintained before a cognitively demanding event) or in reactive executive control (engaged as the event occurs).
Using functional magnetic resonance imaging (fMRI), the researchers took brain scans of 141 adolescents and young adults ages 12-22 (64 with autism, 77 neurotypical controls) enrolled in the Cognitive Control in Autism Study. During the scan, the participants completed a task that required them to adapt their behavior.

They were shown a green or red cue, followed by a white arrow (probe) pointing left or right. In half of the trials participants saw a green cue asking them to push a button that matched the direction of the arrow, and in the other half they saw a red cue that asked to push a button that didn’t match. Trial order was randomized across the experiment.

“Our brains are seemingly hardwired to be able to respond to a probe with a matching action more easily than doing the opposite,” said Andrew Gordon, a postdoctoral scholar in the Department of Psychiatry and Behavioral Sciences and the lead author on the paper.

Analyses of the brain scans during both the cue and probe phases found that participants with autism showed significantly greater brain activity than control participants during the cue in networks associated with proactive control processes, but on the less cognitively demanding trials – the ones with the matching arrow. On the more demanding trials – when the arrow didn’t match – activity was similar across groups.

“This suggests that proactive control is not in fact impaired, but that those with autism implement it in a unique – and not necessarily maximally efficient – manner, because they employ proactive control to prepare for the easier versus the harder trials,” said Marjorie Solomon, a professor in the Department of Psychiatry and Behavioral Sciences and the senior author on the paper.

“Previous research suggests that disruption at a neural level may be responsible for behavioral differences. What we actually show is that participants with autism are simply engaging neural control systems differently to those with neurotypical development.”

Andrew Gordon, postdoctoral scholar in the Department of Psychiatry and Behavioral Sciences

The researchers also found that during the arrow probe, connectivity between regions associated with reactive control processes was uniquely enhanced on the more-demanding trials in individuals with autism, but not in neurotypical controls.

The results were a little surprising, said Gordon. “Previous research suggests that disruption at a neural level may be responsible for behavioral differences. What we actually show is that participants with autism are simply engaging neural control systems differently to those with neurotypical development.”

The researchers noted that the results do not explain why the participants with autism engaged in a different, less efficient strategy during the task than the neurotypical participants.

“Our findings suggest that, as in many other areas, those with autism use a unique strategy to complete a task,” said Solomon. “But it does leave open the question of why they exert more control during the easier task, and it may have to do with reductions in cognitive flexibility.”

Solomon and Gordon added that future research would benefit from manipulating the order in which the stimuli are presented.

In contrast to prior work

“These findings stand in contrast to a lot of prior work on this topic,” noted Gordon. “Although no one study can be considered enough evidence to change how we think about executive control in autism, these findings suggest we need to be more nuanced with regard to this subject in the future.”

Coauthors on the study include Marie K. Krug and Rachel Wulff of UC Davis, Matthew V. Elliot of UC Berkeley, Jeremy Hogeveen of the University of New Mexico and Tyler Lesh and Cameron Carter of the Imaging Research Center in Sacramento.

The research was supported by the National Institute of Mental Health Grant No. R01MH10651802