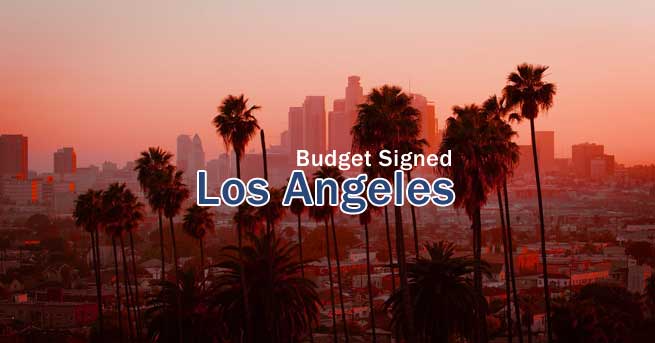 LOS ANGELES – Mayor Eric Garcetti has signed the budget for the 2021-2022 Fiscal Year, a spending plan that dedicates nearly a billion dollars to confronting the homelessness crisis, $300 million for racial and economic justice across the city, and commits critical resources to helping Angelenos recover from COVID-19. The Los Angeles City Council passed the final budget by a unanimous vote.

“This budget is about more than recovering from a once in a generation crisis – it’s about bending the arc of our city’s history in the direction of greater equity and justice,” said Mayor Garcetti. “This moment demands nothing less than our most courageous efforts to lift up those in need, and this budget charts a course to meeting our highest ambitions, restoring what we’ve lost, and building on what makes Los Angeles the best city in the world.”

The signed budget features the City’s largest-ever investment to confront the homelessness crisis at $791 million, which more than doubles its current spending.

All in, with carryover state and federal funding from last year included, the City is projected to spend $955 million to confront the homelessness crisis.

The 2021-22 budget is strengthened by $639 million in spending from the American Rescue Plan. Mayor Garcetti advocated aggressively for this funding over the past year to lift up Angelenos hit hardest by the pandemic, and this spending blueprint puts those dollars to work with $151 million going to equity and justice programs; $281 million for homeless services; $244 million to restore vital services; and $64 million for COVID response and recovery.

“This budget is accountable for City Services, it’s reflective of our fiscal duties, and it’s responsive to the systemic inequities and challenges that held back too many neighborhoods in our City for generations,” said Council President Nury Martinez. “It lays the groundwork for ongoing efforts to address these, because we are not naive, we aren’t going to change historic inequities with one step or with one budget, but with this budget we take a step forward towards that.”

“Approved in the wake of the worst fiscal crisis in City history, the 2021-22 budget is a monumental step forward,” said Councilmember Paul Krekorian, chair of the Budget and Finance Committee. “It enhances park services to levels not seen for over a decade, allocates a record amount of funds to address homelessness in our neighborhoods, provides an array of environmental protections, expands the senior meal program, offers millions to businesses coming out of the pandemic, and attacks the problem of economic inequality across communities. During my tenure as Budget and Finance Chair, there has never been a time when the City Council, Council President, and Mayor worked more collaboratively on this process.”

Other key components of the budget include:

“Mayor Garcetti’s commitment to putting a lens of racial equity on unprecedented investments in alternatives to policing, guaranteed basic income, and ending the homelessness crisis shows how strong leadership can begin to transform systems and bring more voices into the conversation about America’s future,” said Aqeela Sherrills, Executive Director of the Community Based Public Safety Association. “To put it simply, this budget is bold and visionary.”

“Today’s exciting approval of the next L.A. City budget by the Mayor of L.A. reflects the community’s call for bold and substantial reinvestment in our highest-need families, in women and in our young people as we begin to work toward addressing the seismic inequities and systemic inequalities laid bare by the pandemic,” said Maria Brenes, Executive Director of InnerCity Struggle and a member of the Making LA Whole coalition. “I look forward to working with City leaders, including the Mayor and Council President, to ensure an equitable recovery for Los Angeles, especially for the most impacted communities. Thank you, Mayor, for your leadership.”