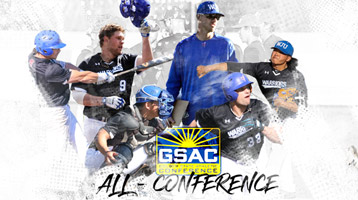 Rocklin, Calif. – The 2018 Jessup baseball season has been a record-breaking season for the Warriors as they continue to make history with each step on the field. Released by the conference office today, the All-GSAC team presented by Under Armour named five from the Warrior’s starting line up with junior Austen Swift nabbing Co-Player of the Year and in his first season as head coach, Jake McKinley garnering GSAC Coach of the Year recognition.

Starting the season with a No. 7 national ranking and crushing the previous program wins record by 19, McKinley has transformed the program from the inside out while receiving national recognition for his leadership. The offensive powerhouse led the country for weeks in home runs, as well as most recently a top leader in the NAIA for home runs and hits.

McKinley is humbled to receive a high honor from his fellow coaches, “I’m obviously thrilled to receive this individual honor, but more so humbled because of who I get to work with. We have an awesome administration, I get to work with selfless assistant coaches who are smarter than I am, and coach players that love the game and love each other. This is very much shared and I’m really lucky to be a part of this team.”

In its fourth season of competition, the Warriors named the program’s first-five All-GSAC honorees in Cal Koga, Joe Starick, Will Law, Tyler Fujimoto and Austen Swift.

“Congratulations to Cal, Austen, Tyler, Will, and Joe for this special recognition,” McKinley commented. “They’ve all worked extremely hard and it’s truly a privilege to coach them.”

Transfer junior from Toronto, Can., Austen Swift has propelled himself both offensively and defensively for the Warriors receiving conference-wide recognition for his talents as Co-Player of the Year. The starting outfielder has appeared in 47 of the 50 contests with a .379 batting average, fourth best in the conference and highest slugging percentage in the GSAC at .695.

Currently Swift has the second-most home runs this season (14), third overall with 219 plate appearance and number one in total bases (121).

“I’m very happy for Austen on being recognized as co-player of the year. He’s been so much fun to coach, not only because of what he can do on the field but also because of the kind of person he is off the field,” said McKinley. “He’s the complete package and has worked very hard for this honor.”

McKinley added, “I would also like to congratulate Michael Stefanic from Westmont on being co-player of the year. He’s one of the best college baseball players I have ever coached against and is very deserving of this recognition.”

Starting in the number two position behind the plate and receiving honors his first year in Warrior uniform was Cal Koga who is ranked 12th in the nation for total chances (369), as well as 12th in total putouts (340). The Lihue, Hawaii native has made 46 appearances this season ranked 11th overall in the conference with a batting average of .344 including 8 home runs thus far.

Also originating from the islands and receiving honors for his performance as a relief pitcher was Tyler Fujimoto who has a conference-high 8 wins on the season and second best 6 saves. The right-handed pitcher has made 18 total appearances with a 2.41 ERA in his 41.1 innings pitched, ranked nationally for his 8-2 overall record and 6 saves.

Receiving accolades for All-GSAC designated hitter was junior Joe Starick from Lafayette, Calif., leading the Warriors with a .415 batting average and impressive .667 slugging percentage. Starick’s skills in the box have also received national recognition as he is in the top 30 in the country for his batting average and first in the conference. The power hitter also leads the conference with a .526 on-base percentage with 13 doubles and 6 home runs in his 51 hits in the regular season.

Closing out the fab five All-GSAC honorees for the Warriors is home run hitter Will Law. The starting third baseman has made an appearance in every game this season with a season-record 15 home runs thus far, good enough for the ninth slot in the country. Coming from La Jolla, Calif., the junior has a .345 batting average while leading the conference with 61 runs scored and drawing, yet again, a record high 49 walks for a .502 on-base average.

Making their first trip to the conference tournament in school history, while sealing the number one seed, the Warriors will head to GSAC Championship host Vanguard University on April 30th to face their first opponent at 3 pm, the winner of the No. 4 Hope International and No. 5 The Master’s matchup.