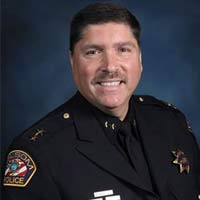 Folsom Names Next Chief of Police

Outgoing Chief Cynthia Renaud was named the City of Santa Monica’s Police Chief and will begin her new position on April 23. She has served as Folsom’s Police Chief since May 2011. Commander Hillman will serve as Folsom’s Acting Police Chief until his new permanent appointment is effective April 23. A swearing in ceremony is set to follow.

Commander Hillman will oversee the Folsom Police Department’s $21 million budget, 106 employees and 75 volunteers. He will manage and direct the planning, development and implementation of all law enforcement, animal services and crime prevention programs for the City.

“I am honored to have this opportunity to lead the men and women of the Folsom Police Department,” said Commander Hillman. “This is a premiere law enforcement organization with a staff committed to providing the best possible police services to the community. As a longtime member of the department and resident of Folsom, I look forward to enhancing our progressive outreach programs and working hard to keep our community as one of the safest in the nation.”

Commander Hillman joined the Folsom Police Department in 1995 as an officer and has served in numerous roles throughout the department, including assignments in the K9 Unit, SWAT and field training. His supervisory positions included patrol, investigations, professional standards and internal affairs. His most recent assignment has been commander of the Operations Bureau, which represents all uniformed personnel, including Patrol, Traffic, Commercial Enforcement, K9 Unit, Mounted Enforcement Detail, Animal Services, School Resource Officers, and the Community Crime Suppression Unit.

Commander Hillman holds a Bachelor of Science degree in Criminal Justice Management from the Union Institute and University. He is a 2008 graduate of the Sherman Block Supervisory Leadership Institute and has earned intermediate, supervisory, and management certificates from the California Commission on Police Officers Standards and Training. He is a member of the International Association of Chiefs of Police, California Association of Tactical Officers, and California Police Chiefs’ Association.

Commander Hillman lives in Folsom with his wife of 32 years. They have three children and six grandchildren.