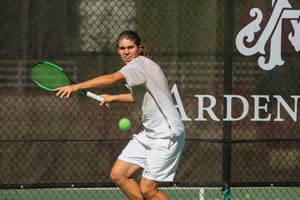 SACRAMENTO, Calif. – JMG Tennis at Arden Hills is proud to announce two tennis players from their program – Jenson (JT) Brooksby and Collin Altamirano – have made the main draw in the U.S. Open that begins on Monday, August 27, 2018, at the USTA Billie Jean King National Tennis Center in New York City.

Altamirano is scheduled to compete on Monday (exact time to-be-determined) and Jenson is likely to compete on Tuesday. This is the first time that two players from the JMG Tennis at Arden Hills program are competing in the world’s grand slam tennis event.

Sacramento native Jenson Brooksby (age 17) won the Junior National Championship title in Kalamazoo, Michigan, the most prestigious junior event in the country, to earn a wild card into the main draw of the 2018 U.S. Open. Additionally – and after earning a wild card entry into the qualifying U.S. Open draw and winning three consecutive matches – Yuba City native Collin Altamirano (age 22) made the main draw of the U.S. Open. In August 2013, Altamirano made tennis history by becoming the first unseeded player to win the USTA National Championship Boys 18s Division in Kalamazoo, Michigan, and earned his first wild card to the Men’s U.S. Open.

“It’s definitely an amazing whirlwind experience having two players from our program competing in the U.S. Open,” said Joseph Morris Gilbert, owner of JMG Tennis at Arden Hills. “It is especially thrilling to watch two players I’ve trained since they were each seven years old who are at different points in their tennis journeys. This is the first time here for Jenson and the third for Collin, who is five years older and already on a professional path. I also want to share how much we all appreciate the support base back home with so many phone calls, texts and social media shout-outs. It’s truly a humbling experience.”

Led by Gilbert, JMG Tennis first began in 2011 and was immediately recognized as a program for the best junior players in the country to learn, progress, train and compete with each other. The program first started in Fair Oaks before moving to its current home at Arden Hills in 2013. As part of the coveted program, numerous national junior champions train and excel together as part of the Academy under the leadership of Gilbert and a top-notch professional coaching staff. Interested young athletes must apply, be assessed and try-out for a position in the thriving year-round Academy. The high performance program demands a high level of dedication from players, parents and coaches, and the players are selected based on their work ethic, attitude and skill.

For more information about the JMG Tennis at Arden Hills or other high performance and/or recreational tennis programs available, please call 916-482-6111.