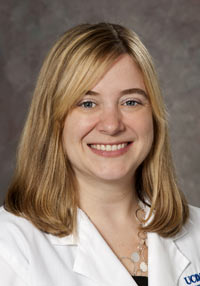 SACRAMENTO, Calif.- UC Davis neonatologist Kristin Hoffman will receive a national award for her development of a webcam program in the Neonatal Intensive Care Unit (NICU), enabling parents to see their infants remotely when they are unable to be in the NICU. The webcam program was made possible by a Children’s Miracle Network grant in 2014, and Hoffman was able to increase the number of webcam units and their reach, as well as upgrade the software through another grant in 2018.

“I’m so thankful that the Children’s Miracle Network gave us the money to do the project in the first place. I’m so thankful for all the work that the rest of my team has done,”

Hoffman was surprised with the news about her award during a Department of Pediatrics faculty meeting, in which Children’s Miracle Network Hospitals chief executive officer John Lauck phoned in to congratulate her.

“It really is a well-deserved honor. She really has put a lot of effort into developing this system. I think the real winners, though, are the families, when I recognize that parents who aren’t able to be at the bedside as much as they would like to be can view their baby from home. It really has improved the connections and bonding between families,” said Mark Underwood, division chief of the neonatology at UC Davis Children’s Hospital.

Hoffman will be honored at Children’s Hospital Week, a CMN national conference in Orlando, Florida this March.