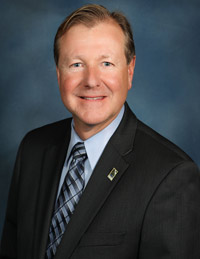 Folsom, Calif. – Folsom City Manager Evert Palmer announced that he will retire July 15 after serving the City of Folsom for 22 years, including seven years as city manager and six years as assistant city manager.

“Serving this community, helping to shape its future, has been the highlight of my career and a remarkable part of my life. Looking back over the last two decades, I’m proud to help lead and plan the great City of Folsom we know today-the best place in California to raise a family,” Palmer said. “Folsom is, and will remain, a great community because of the quality of its leadership, the dedication of its employees, and the involvement of its citizens.”

Palmer is credited with leading the planning and construction of the state-of-the-art Folsom Public Library Georgia Murray Building. He was also a driving force behind the revitalization of Historic Folsom. During his tenure, he expanded public safety services, improved customer service and helped recruit major employers to Folsom. During the unprecedented economic recession and dissolution of the City’s redevelopment agency, Palmer worked with the Folsom City Council and management team to maintain the high level of Folsom’s services and amenities by redesigning service delivery and reducing transactional costs.

“On behalf of the Folsom City Council, I would like to express our deepest appreciation for Evert’s exceptional leadership at the City’s helm,” Mayor Steve Miklos said. “He has built a tremendous legacy and stable foundation which our City Council, our staff and our citizens can build upon for years to come.”

The Folsom City Council appointed Palmer as city manager in October 2011. He previously served as the assistant city manager, director of administrative services and assistant director of finance/information technology manager. He is an adjunct professor of public administration at Golden Gate University.