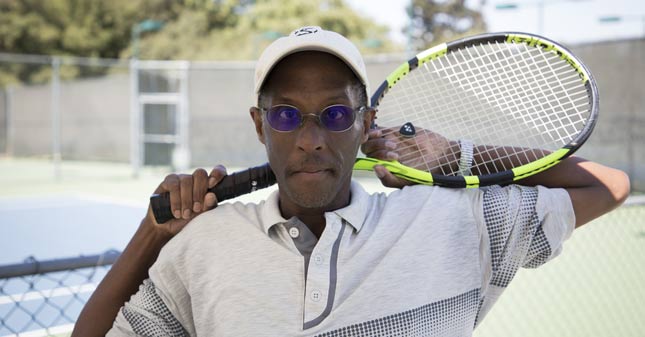 (SACRAMENTO, Calif.) – A whole new world is opening up for Dazell Mallory, 47, who was born with a very severe form of near-sightedness that also predisposed him to the development of cataracts, which cloud the lenses of the eyes, further reducing vision.

By the time he was in his mid-30s, he could only see shadows and vague movements of objects placed inches from his face. He began using a white cane and screen-reading software, and learned braille.

Today, he can drive, and his vision is near normal — 20/30 and 20/70 with glasses. He has even returned to his favorite sport, playing tennis at a local racquet club, which is also therapy to help strengthen his eyes to work together.

“At my post-op exam, I went into the office with a white cane and left without needing a cane at all,” he said.

Mallory was born with pathological myopia, a condition that alters the shape or globe of the eye and leads to vision loss that continues to progress throughout life. It is a cause of legal blindness in the U.S., affecting 2 to 4 percent of the population.

“My cataracts became extremely thick, and all of the other doctors I had seen throughout my life considered my condition much too complicated and risky to correct with surgery,” Mallory said.

When he was referred to the UC Davis Eye Center in 2017, ophthalmology Professor Jeffrey Caspar examined his eyes and suggested surgery to remove the cataracts, first in one eye and then the other.

“Dr. Caspar said that the outcome of surgery was uncertain, that I could still be legally blind with a little bit better vision or that the surgery would not help at all,” Mallory said.
Mallory decided to go for it, and his outcome was better than expected.

Caspar, who specializes in small-incision cataract surgery and researches new techniques for extracting cataracts, said people with less severe eye problems have not had the outcome that Mallory had.

“Mr. Mallory’s complex surgery required delicate precision and use of techniques and lens implants not used in more routine cataract surgeries,” Caspar said. “His surgery was quite challenging but as a tertiary care referral center, we care for patients with complex conditions from all over California.” Mallory is naturally thrilled.

“At my post-op exam, I went into the office with a white cane and left without needing a cane at all,” he said.