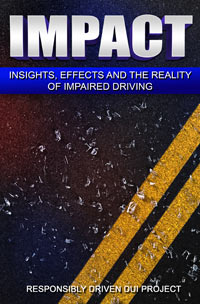 In 2017, there were 10,847 people killed in alcohol-impaired driving crashes, an average of one fatality every forty-eight minutes. (NHTSA 2018)

IMPACT: Insights, Effects and the Reality of Impaired Driving is the first book of the Responsibly Driven series.

The crime of Driving Under the Influence (DUI) negatively impacts tens of thousands of people each year. Despite numerous DUI prevention campaigns, every day countless individuals continue to get into their cars and drive intoxicated. Why is it that people from all walks of life fail to appreciate the inherent dangers of impaired driving or the devastation it leaves behind?

Impaired driving is a one-hundred percent preventable crime. The intent of this book is to bridge DUI offenders with everyone in hopes of establishing a greater awareness and a dialogue for effective DUI prevention.

Let’s turn the existing negative consequences of impaired driving into a positive impact.