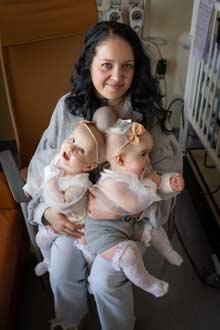 SACRAMENTO, Calif. – Nine-month-old conjoined twins Abigail and Micaela Bachinskiy are recovering at UC Davis Children’s Hospital after surgeons successfully separated them in a marathon surgery on Oct. 23 and 24.

The 24-hour surgery took place in the UC Davis Children’s Surgery Center in an operating room that was custom-built for this level of surgical complexity. This was the first separation of conjoined twins at UC Davis Children’s Hospital. The team of experts included more than 30 people: surgeons, nurses, anesthesiologists and other key surgical staff. They were led by pediatric neurosurgeon Michael Edwards, chief of plastic surgery Granger Wong, director of pediatric anesthesiology Rajvinder Dhamrait and Children’s Surgery Center nursing lead Aida Benitez.

“This is a landmark surgery for us at UC Davis Children’s Hospital,” said Edwards, who has had previous success separating conjoined twins. “Abigail and Micaela are doing well and recovering in our Pediatric Intensive Care Unit, thanks to an amazing team effort dedicated to ensuring these very rare twins have the best shot at a healthy life ahead. We are honored to have helped with their birth, cared for them since, and to now give them the chance to live independent and separate lives.”

Planning for the birth

UC Davis Health has provided care for Abigail and Micaela from the start – even before birth.

Mom Liliya, 33, received the news that she was pregnant with conjoined twins when she was 11 weeks pregnant. Her doctor referred her to the UC Davis Fetal Care and Treatment Center for the extensive prenatal care she needed. It is the only comprehensive fetal diagnosis and therapy center in inland Northern California.

A fetal MRI provided more details about the anatomic structures of the twins. Conjoined manikin dolls were developed based on the MRI. This helped the team identify challenges with the twins’ positioning and assisted in planning for their delivery.

Simulations and scenarios were practiced for months to prepare for numerous possible risks: compromised airways, collapsed lungs, the need for a CPAP machine to aid in breathing or IV placement. CPAP headgear was custom-designed for each girl. The choreography was practiced and repeated for each scenario.

Abigail and Micaela were born at UC Davis Children’s Hospital on Dec. 30, 2019. They spent seven weeks in the Neonatal Intensive Care Unit (NICU) before going home.

“We have felt so much support from staff. We have received so much help, so much advice. It has made us feel at home here,” Liliya said.

Separating twins conjoined at the head

Surgeons decided to separate the twins at nine months of age. They did not want to wait longer.

“As they get older, there are more risks of shared blood vessels and organs becoming larger or more entwined. The upcoming flu, COVID-19 and RSV season was also a concern,” lead plastic surgeon Granger Wong said.

To prepare for the procedure, the surgical team spent months carefully tracking the twins’ growth through MRIs and CT scans.
In June, Wong’s team placed custom-designed tissue expanders underneath the skin of the girls’ heads to encourage more skin to grow. This would ensure enough skin to cover the exposed area of their skulls upon separation.

High-tech preparation for the surgery included the 3D printing of multiple models of the twins’ fused skulls. The models allowed the team to plan and practice the surgery with a high degree of precision. Surgeons also were able to explore inside the twins’ heads with the use of mixed reality goggles. The technology provided an augmented view of the complex network of blood vessels the team would need to detangle and separate – before ever bringing the twins into the operating room.

The surgical team and family kept in close touch in the months leading up to the procedure. The surgeons made routine house calls to the family’s home, so the family would not need to come to the clinic for checkups amid the COVID-19 pandemic.

Finally, this past Saturday, the practicing became reality for a team of more than 30 surgical professionals.

With so many key players in one space, each with a distinct role to play, the team members were divided by color. Leaders Edwards, Wong, Dhamrait and Benitez donned black caps. Team Purple took care of Micaela, while Team Orange cared for Abigail; they donned surgical caps in either purple or orange for easy visibility in the operating room. Surgical residents wore grey caps and could assist with either girl. Purple and orange masking tape were used to label equipment for the respective teams in the operating room. Overall command and control were led by Dhamrait and Benitez.

The plastic surgeon made the initial incisions. “It was like a choreographed ballet,” said Wong, who also created the design of skin flaps, removed the expanders and reconstructed the skull and scalp after the twins were separated.

Surgical challenges included dividing large veins and brain matter that connected the twins so they could have independent circulatory systems. The team performed a fistula ligation, a process that involved clipping and separating shared veins. During the surgery, the twins required five position changes, all of which posed potential complications. They also needed blood transfusions during the procedure.

Edwards announced, “Cranial separation!” when the babies were officially separated at 3:28 a.m. The surgical team clapped and cheered.

“After 10 months of preparation, we were witnessing what we had all envisioned for the girls and we were overcome with emotion and joy,” said Benitez. “I will never see 3:28 on a clock again and not think of the moment that Abi and Mica became two separate babies.”

Dhamrait led a team of six anesthesiologists who administered anesthesia and medication to maintain the twins’ blood pressure during and after separation. The twins’ shared anatomy complicated each anesthetic. “We were fortunate that we had anesthetized the twins four times prior,” said Dhamrait, who has taken part in a conjoined twins separation before. “It was flawless, with all contingencies covered.”

Throughout the 24-hour procedure, Benitez provided regular updates to the family, who was praying and nervously awaiting news about their girls.

Twenty-four hours later, on Sunday morning, the previously joined twins were resting comfortably – and separately – in their room in the UC Davis Pediatric Intensive Care Unit.

“Everything went well. It felt almost impossible to separate them, but God and the doctors and nurses at UC Davis made it possible. We are so thankful,” Liliya said.