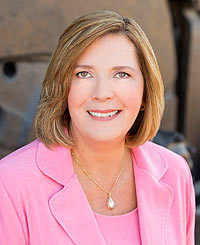 SACRAMENTO CA,- California State Railroad Museum Foundation President & CEO Cheryl Marcell was recently named to serve on the prestigious Executive Committee of the California Travel Association. The mission of the statewide organization is to protect and advance the interests and investments of California’s travel and tourism industry through advocacy, collaboration, and education.

Marcell is the only current Executive Committee member who represents a tourist attraction, which includes both the California State Railroad Museum located in Old Sacramento State Historic Park and Railtown 1897 in Jamestown (the heart of California’s Gold Country).

With an impressive and expansive background in business development and the airport industry, Marcell joined the California State Railroad Museum Foundation in April 2015 where she has been instrumental in helping to reinvigorate and pave exciting new paths for the prized destinations her Foundation supports.

“We are thrilled to have Cheryl Marcell join the leadership team of the California Travel Association as a member of our Executive Committee,” said Barbara Newton, President & CEO of the California Travel Association. “Her deep experience in attractions, airports, and tourism along with her expertise in advocacy provide a critical perspective to our work in promoting and protecting the travel and tourism industry in Sacramento.”

Marcell’s new role on the executive committee comes at an important time for the rail industry and tourism to the Sacramento region in general. In May 2019, the California State Railroad Museum & Foundation led city-wide efforts to honor the 150th anniversary of the completion of the Transcontinental Railroad in grand style. Looking forward, exciting plans are in development to renovate the iconic Old Sacramento Waterfront that will further solidify Sacramento as a sought-out tourism destination throughout the nation and world.