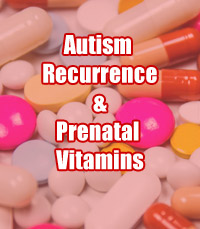 The study appearing today in JAMA Psychiatry reports for the first time that maternal prenatal vitamin supplementation use near conception is associated with decreased autism risk in subsequent siblings of children with ASD.

Autism is a growing concern, with one in every 59 children affected in the U.S. Younger siblings of children with ASD are about 13 times more likely to develop the disorder than the general population, with a recurrence risk of nearly one in five.

The study findings could be important for families who have children with autism and are planning new pregnancies. If replicated, the study results imply that genetic susceptibility could potentially be overcome by taking prenatal multivitamins.

Studying a pregnancy cohort of 241 families affected by autism, we found that even though these families are at a likely greater risk for an ASD diagnosis for a later sibling due to genetic heritability of ASD, taking prenatal vitamins during the critical early pregnancy period contributed to the reduction in ASD risk in siblings by about half,” said Rebecca J. Schmidt, assistant professor in the UC Davis Department of Public Health Sciences and a MIND Institute researcher. “So, in other words, this is about protection against recurrence of ASD in high-risk younger siblings of children with autism.”

Start prenatal vitamins when you expect to be expecting

The study found that most mothers (96 percent) reported taking a prenatal vitamin at some point during pregnancy; however, only 34 percent took them before pregnancy, as recommended. Mothers who took prenatal vitamins in the first month of pregnancy were more educated and more likely to own their homes, have private health insurance and have had an intentional pregnancy than mothers who did not take prenatal vitamins during the pre-pregnancy period. The analysis took account of all these factors.

Participants were recruited from families participating in MARBLES (Markers of Autism Risk in Babies: Learning Early Signs), a prospective pregnancy cohort study of younger siblings of children with autism and receiving services from the California Department of Developmental Services. They included mothers who have a child with confirmed ASD and are planning a pregnancy or are pregnant with another child. The study looked at the younger siblings at high risk for autism born between 2006 and 2015 and who received a diagnosis at age 3.

Findings from this study emphasize the importance of taking prenatal vitamins, including folic acid, starting the first month of pregnancy to reduce the recurrence risk of ASD. Many families of children with autism were avoiding folic acid supplementation during their second pregnancies because of inaccurate online reports that it could cause autism.