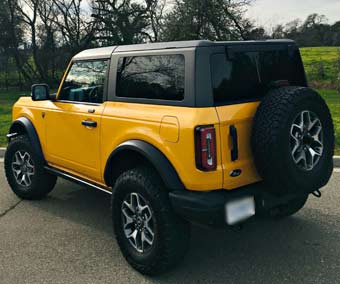 Roseville, Calif.- There’s little doubt that Ford is rather pleased with this “problem.” Due to its popularity, purchasing a 2022 Ford Bronco requires great patience.

Don’t bother going to a dealership to purchase a Bronco because Ford can’t keep up with the demand. There’s a good chance you may not even see one, much less get a test drive. The company says it already has 190,000 reservations for this year’s Bronco.

During our week with the two-door Bronco Badlands model, we answered lots of inquisitive questions from bystanders and received many approving nods from other drivers.

Caught in the crosshairs of last year’s Bronco debut was the Jeep Wrangler. In reintroducing the Bronco following its discontinuation in 1996, Ford clearly has its sights on the Jeep Wrangler and surpassing its terrific off-road reputation.

The Bronco comes standard with all-wheel drive and is available as a two-door or four door, and with a soft or hard top. Removable body panels and doors is another option.

It offers the same open-air possibilities that make the Wrangler so popular with outdoor enthusiasts. Note that the two-door wheelbase and length are both 15.7 inches shorter than the four-door Bronco.

Not to be confused with the less rugged Bronco Sport, the truck-based Bronco is capable of conquering some difficult, unpredictable terrain.

If off-roading plays a major role in the purchase choice, give the Bronco Raptor a look. It has 37-inch tires and is a beast out in the wild. Another option is the Bronco Sasquatch that comes with 35-inch all-terrain tires.

The standard Bronco has a choice of two turbocharged engines. The bass model is a turbo 2.3-liter, inline-four that generates 275 horsepower and 315 pound-feet of torque. It travels 0-60 mph in 7.0 seconds.

Equipped with an optional trailer hitch allows the Bronco to haul up to 3,500 pounds. It has a payload that tops out at 1,170 pounds.

The truck-based Bronco drives fairly well for a vehicle that’s mostly designed for off-road situations. Because it has an independent front suspension, steering this rather loud vehicle is better than expected and it has good stability at freeway speeds. Slow down on the curves; the Bronco doesn’t like them too much.

The Bronco gets the nod over the Wrangler in terms of comfort, due to its roomier seating, better support, and solid head and leg space.

We had no major issues getting accustomed to the 8-inch touchscreen. The Bronco has the latest Ford infotainment and connectivity software. It comes standard with six-speaker stereo, USB ports, Bluetooth, Wi-Fi hot spot, Apple CarPlay and Android Auto integration.

The Bronco smartly has a rack on the top of its dashboard that’s capable of mounting smartphones and GoPros. We weren’t too fond of the amount of cheap plastic materials, something that could easily be avoided.

The cargo area is larger than the Wrangler – 22.4 cubic-feet with the two-door model and 35.6 cubes with the four-door.

It’s nice to have the rough and tumble Bronco available again. It’s a grinder in off-road situations and its overall look is something that’s definitely going to attract anyone shopping for a rugged vehicle.