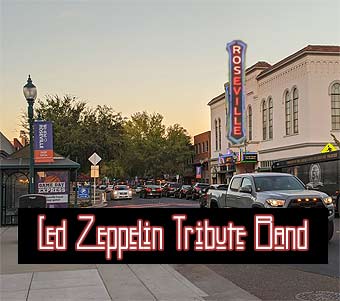 Roseville, Calif.- 44 years gone since Led Zeppelin would play their final American concert under the sunny skies at the Oakland Coliseum during the summer of ’77. For fans looking to revisit a little of the musical magic, head to Downtown Roseville this Friday night to experience Led Zeppelin Tribute band ZOSO at the Goldfield Trading Post.

Although it’s been over four decades since Led Zeppelin called it quits, their musical influence remains an enduring force. Their songbook remains a staple on radio and are regularly covered from artists across the musical spectrum as they continue to influence continuing generations of acts.

The era of rock stars who enjoyed mythical status may have faded into cultural history, but ZOSO formed in 1995 helps fans recapture a small glimpse of the juggernaut that was Led Zeppelin. ZOSO aims to recreate the spirit in both song and style.

Whether your a longtime fan of Led Zeppelin or looking for a fun night of 70’s style music and entertainment, join us in Downtown Roseville this Friday night as we flashback to the 1970’s for evening of some classic rock n’ roll. Bell-bottoms are optional.