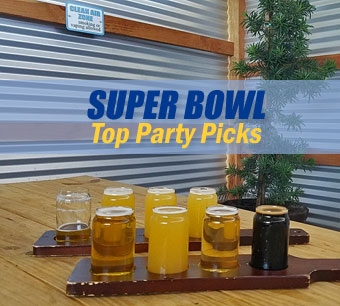 Roseville, Calif.- This Sunday at SoFi Stadium in Los Angeles, the Rams take on the Cincinnati Bengals in Super Bowl 56. The unofficial national holiday of $7 million dollar commercials, food and drink and a little football.

When it comes to celebrating, there are countless options from the basics of chips and brews to elaborate feasts of indulgence. When it comes to some Super Bowl classics, here’s a few local favorites that make the cut. Tell us your picks here!

Jersey Mike’s
With several locations in South Placer, Jersey Mike’s is a welcome sight for the growing East Coast transplants looking for traditional Italian and deli subs. Our top pick is the Turkey sub, made “Mike’s Way” of course!

A cold beer or two…or three is a Super Bowl must for many during football season. Placer County boasts some exceptional craft brews that make it easy to ditch the mass marketed corporate beer. Lots of good options here that can be found in local supermarkets and big box stores. More of the wine or spirit crowd, then head over to Total Wine & More for a selection that is out of this world.

No Super Bowl gathering in California would be complete without a bottle or two of California wine paired with cheese and fruit. We agree with the words of Mick Jagger, “Thank you for your wine, California Thank you for your sweet and bitter fruits.” One of our top picks goes to Nugget Market for those looking to put together a scrumptious Super Bowl spread with a quality Napa or Sonoma wine.
Favorite Cabernet: Anything we’ve tried so far from Alexander Valley!

For those who enjoy healthier celebrations without a food coma and hangover, local vegan and vegetarian restaurants offer a solid alternative. Putting together a spread yourself? Whole Foods is the no compromise way to go! Flavorful and creative party ideas on the healthier side without sacrificing deliciousness!

What’s are your Super Bowl staples and favorites?