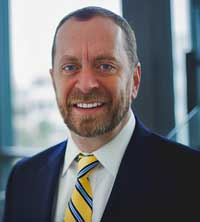 Roseville, CA- With a vision of establishing a “first-class venue” and contributing to the continued success of Placer Valley, Charlie Gardner takes the reins as general manager of @the Grounds.

With over 20 years of experience in the event management profession, Gardner comes in to build upon decades of tradition, extensive renovations of @the Grounds and the introduction of the state-of-the-art Roebbelen Center.

“@the Grounds is special because it’s a unique mix of community history and, at the same time, @ The Grounds is something brand new.”

Gardner adds, “There is a rich history of the facility being a big part of the community that is a lot of fun to be involved with and we have the brand new Roebbelen Center where we can create some new memories.”

Of the Roebbelen Center, Gardner said there is a unique facility in that it is a state-of-the-art sports venue and is flexible enough to host just about every kind of event. The design of the facility and its location make it primed to be successful and a successful part of the community. I could immediately see that it will be an asset for Placer County for many years to come and an opportunity to build something great.

Born and raised in Texas, Gardner went on to graduate from Lamar University in Beaumont, TX. From there, his professional career has taken him all over the country where he has called cities up and down the United States home.

While Gardner had no idea that the facilities or events management industry even existed when he began his career, he loved it almost immediately and has been fortunate enough to stay in it as long as he has.

After beginning as an Event Coordinator for the Astrodome in Houston, TX, his career has led him to manage facilities in Texas, Louisiana, Iowa, Tennessee and Missouri.

In his most recent travels, Gardner comes from the position of Project Manager at the Washington State Public Stadium Authority which owns Lumen Field, home of the Seattle Seahawks. Prepared to undertake all project management oversight, Gardner said COVID-19 essentially shuttered all events to the public and delayed projects due to that work not being considered essential.

Coming to @the Grounds in the midst of COVD-19’s most recent surge, Gardner brings an approach of patience.

“Personally, the biggest lesson that I have learned from COVID is how to be patient,” Gardner said. “I had to recognize pretty quickly that I had very little personal control of my day-to-day life during this difficult time. Which was understandable considering the situation. We’ve all had to make sacrifices, but I was very lucky during this time that my difficulties were not as bad as others. I realized how grateful I should be as well.”