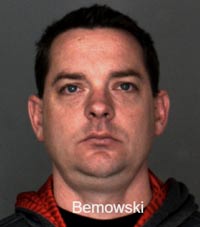 A 16-year veteran of the Chino Police Department has been arrested on suspicion of solicitation of prostitution and unlawful sexual intercourse with a minor which occurred while he was off duty at a residence in the City of Redlands.

Chino Police Sergeant Jason Bemowski was arrested on Thursday, March 7, 2019 as part of a human trafficking investigation being conducted by the Roseville Police Department involving a 16-year-old female victim.

In a related connection with this case, we’ve also arrested Anthony Harrison (8/11/1994) on charges of pimping and pandering as well as human trafficking. He’s currently being held at the South Placer Jail on $1 million bail.

The investigation is ongoing. Anyone with information related to the case is asked to contact CSU Sergeant Darren Kato with the Roseville Police Department at (916) 774-5000.