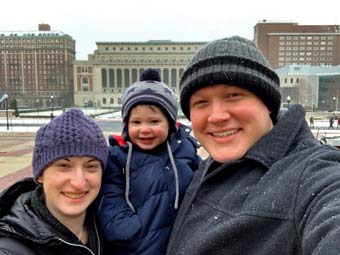 Roseville, CA- After taking high school classes through a dual-enrollment program at Sierra College in Rocklin, Tanner Zumwalt graduated from the University of California, Davis, in 2012 at the age of 18.

The father of two young sons, Zumwalt and his wife Jenna Gould, a 2021 graduate of Columbia’s School of International Public Affairs and a military veteran, have advocated for ways Columbia can alleviate the financial burden of childcare for student-parents and helped establish the Childcare Affordability Initiative.

In this short video, Zumwalt shares how being a parent helped shape his Law School experience, why corporate law fits in with his background in the military, and what the law means to him.

He is a former army officer who served as a tank commander from 2013-2017, completing overseas tours to the Middle East and East Asia. As a J.D. ambassador with Service to School, a non-profit that provides free college and grad school application counseling to military veterans and servicemembers, Zumwalt has helped nearly a dozen veterans and active duty servicemembers navigate the law school admissions process.

Zumwalt plans a career as a corporate attorney and will work at Davis Polk & Wardwell in its Menlo Park, California, office. He one day hopes to run for office in order to advocate for developing and rural communities.