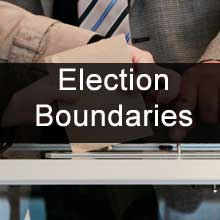 In November 2019, the City Council voted to move from at-large to district-based elections starting in 2020.

The Independent Redistricting Commission will be selected in December of 2020. Applications will be available on September 1, 2020. The Commission will consist of eleven members and five alternates. In a public setting, the City Clerk will randomly select the initial eight members of the commission from the qualified applicants, two each from four geographic quadrants of the city. Applicants must be 18 years of age and be a resident of the City for at least three years immediately preceding the date of application.

The eight commissioners selected shall then select three at-large commissioners and five at-large alternates from the remaining applicants.
Residents not eligible to serve include current City Council members and their families, candidates for City Council and their families, employees of partisan elected officials, paid political consultants, employees of any redistricting contractor and current members of the Placer County Board of Supervisors. Those who are serving or have served on the Placer County Central Committee of either the Democratic or Republican Party during the past eight years or residents who contribute five hundred dollars in a year to any seated councilmember or current council candidate are also ineligible to apply.

As an independent body, the Commission will be empowered to adopt the district boundaries, without City Council approval. The district map developed by the Commission must follow all state and federal laws, including having Council districts which are substantially equal in population and are geographically contiguous.