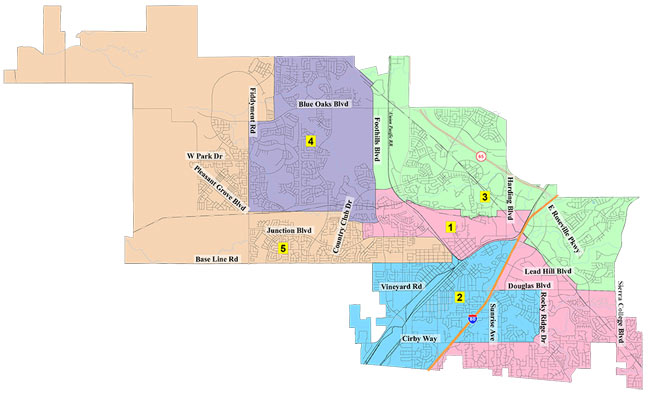 District boundaries not without controversy

Roseville, CA- The Roseville City Council approved the final reading of an ordinance to establish district-based elections at its Dec. 4 Council meeting.

The City Council approved district boundary map 117B from more than 30 maps considered. The map consists of five districts, which aligns with the number of councilmembers the City Charter requires.

The decision to adopt a “district-based” election format instead of an at-large format isn’t due to a philosophical change by the City Council. Rather it’s a strategic, proactive move to potentially save the city millions of dollars in legal fees.

Read more about the reasons for moving to district-based elections and the risks for continuing at-large elections.

District-based elections will begin with the November 2020 vote. The district boundary map approved by Council is based on data from the most recent census, which was in 2010, as required by law. It will only be in use for the 2020 election cycle. With updated population data from the 2020 census, the district boundary map will change for the 2022 election.

With input from the public, the City Council directed the Charter Review Commission, to provide recommendations on the selection process for mayor and vice mayor. The Charter Review Commission meets every 10 years and is in the midst of a yearlong process to review the entire charter and make recommendations for changes to the City Council. The Council then determines which items to put on the November 2020 ballot for voter consideration.

Currently, the City Charter designates the top vote-getter in the last general election as the incoming vice mayor for two years, then as mayor for the remaining two years of the councilmember’s four-year term.

As the candidate who won the most votes in the 2018 election, current Vice Mayor Krista Bernasconi will become mayor in 2020, for the final two years of her term, in accordance with the City Charter. Any changes to the process will affect how her successor is determined.