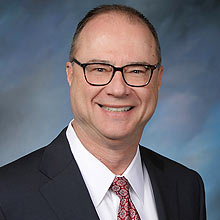 Schmitt has worked on key projects in one of the most dynamic periods in the City’s 112-year history, including the permitting and construction of the Roseville Energy Park, negotiating and drafting numerous development agreements (including Sierra Vista Specific Plan), and numerous litigation successes.

The legacy he’s most proud of is instituting a culture of personal and professional development in the City Attorney’s office, ensuring his staff is prepared to take on new responsibilities and roles in the organization. “It’s what we’ve built and leave behind that matters most,” he said.

“He’s not only a consummate professional who provides sound legal counsel, he’s a leader who exemplifies the utmost character and heart for public service.”

City Attorney is the only other position besides City Manager that the City Council directly hires. To hold such a position, candidates usually spend their whole career in the legal field. But Schmitt’s path to the top legal job began when he immigrated to the United States as a child in 1964 and later established a career in the auto industry.

When Schmitt arrived in the U.S., it was less than 20 years since World War II had ended, and he only spoke German. Along with overcoming taunts about his German heritage, Schmitt quickly mastered English as a second language. He set his sights on becoming an auto mechanic and in 1984, he became a U.S. citizen.

His entrepreneurial nature led him to establish Campbell European, a service and repair business for Mercedes Benz automobiles with a loyal following of customers in Campbell, Calif., that he ran for 11 years.

Schmitt was always interested in philosophy, history, and political science. He began interviewing his clients about their careers, seeing if there was a profession that might allow him to integrate his interests and to follow a calling to public service.

In 1993, as a husband and father of two small children, he began his mid-career change. With the support of his wife, Sharon-“I’m still amazed how she supported me,” he said-Schmitt spent two years at UC Santa Cruz completing his bachelor’s degree and three years at the McGeorge School of Law at University of the Pacific’s Sacramento campus.

“Law school seemed to be the best way to utilize those interests and to do good things and right things by serving in the public sector,” he said.

In 2015, the City Council selected Schmitt to be City Attorney. His office guides the Council and a staff of 1,100 working in 14 different departments with various specializations. The breadth of knowledge and history Schmitt has amassed will be missed.

“I’ve worked closely with Bob for the past 11 years, during my time on the Planning Commission and City Council,” said Mayor Krista Bernasconi. “He’s not only a consummate professional who provides sound legal counsel, he’s a leader who exemplifies the utmost character and heart for public service.”

City Manager Dominick Casey has worked with Schmitt since Casey joined the City in 2011 as director of Parks, Recreation and Libraries. “Bob is an expert in his field and an expert at leading his staff. He can sort out the most complex legalities of a situation one week and the next week, he and his staff are in costume, handing out candy in a make shift haunted house in their office,” Casey said. “That’s the kind of combination of professionalism and fun that make Roseville such a great place to work.”

The City Council will consider a contract for his successor at the April 7 City Council meeting. The contract would begin May 29, the first day of Schmitt’s retirement.