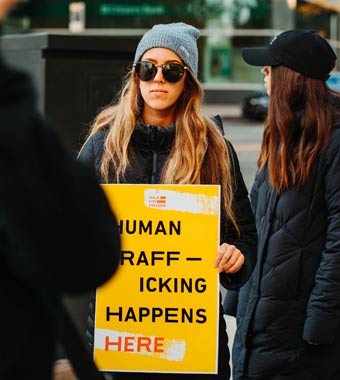 Combating one of the most depraved crimes

Roseville, Calif. – Joining district attorneys’ offices from across the state, the Placer County District Attorney’s Office announced their support for legislation that will increase penalties on human trafficking cases.

Senate Bill 1042, introduced by California state senator Shannon Grove, will amend current law to add human trafficking to the list of serious and violent crimes that make the crime eligible to be treated as a ‘strike’ offense.

“Human trafficking is one of the most depraved crimes the state, nation and world has had to combat.”

“The value of human life is worth fighting for and we need every tool at our disposal to fight trafficking at every level. This bill is a strong step towards returning dignity to survivors, holding traffickers more accountable, and ending the suffering of those affected by human trafficking,” said Placer County District Attorney Morgan Gire.

There are an estimated 40 million people globally in the last decade that have been forced into human trafficking, a crime that is considered the modern-day form of slavery. It is one of the world’s fastest-growing and most lucrative crimes, generating approximately $150 billion around the world each year.

SB 1042 has been scheduled to be heard in the California Senate Public Safety Committee. Residents can read the bill language here.