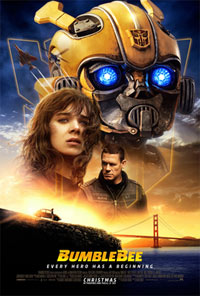 Hollywood, CA- The production of Paramount’s Bumblebee contributed more than $84.8 million to the California economy, according to new data released by the studio. The production hired more than 2,800 local workers, who took home nearly $50.5 million in wages, and supported 1,250 local vendors. The Transformers prequel spent 189 days on locations in Solano, Inyo, Los Angeles, Mammoth, San Francisco, and Santa Cruz.

“When it comes to the latest installment of the Transformers franchise, there’s more than meets the eye,” said the Motion Picture Association of America’s Chairman and CEO Charles Rivkin. “The production of this film not only directly employed thousands of creative professionals, it also spent tens of millions of dollars at local businesses throughout the state – adding to California’s already robust creative economy.”

By the numbers, Bumblebee’s production spent:

“America’s creative industries provide entertainment around the world while creating more than $1.2 trillion in economic activity right here at home. And none of it would be possible without the thousands of below-the-line craftspeople, artists, engineers, and more who work on the film,” said Creative Rights Caucus Co-Chair Representative Judy Chu (CA-27).

“Films like Bumblebee employ thousands of local vendors and spend millions on lodging, food, transportation, and wages. The local impact of the film industry for my district is huge, and I’m so proud to support the film industry and other creative industries.”

Bumblebee, the sixth installment of the live action series, sets the beloved titular character’s backstory 20 years before the 2007 original. It was directed by Travis Knight, the first to helm a Transformers installment since Michael Bey, and stars Hailee Steinfeld, John Cena, Jorge Lendeborg Jr., John Ortiz, Jason Drucker, and Pamela Adlon, with Dylan O’Brien as the voice of Bumblebee.