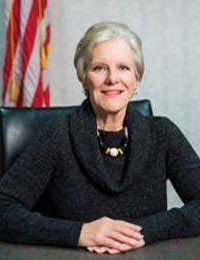 Granite Bay, CA – At its biennial conference, the Association of California Water Agencies (ACWA) elected Director Pam Tobin as vice-president for the 2020-21 term which began on January 1, 2020.

Director Tobin is only the second vice-president of ACWA from the Sacramento region during the Association’s 110-year history and is the fourth woman to serve in that role. ACWA is the statewide trade association that represents 400+ public water agencies in California.

“I am honored and humbled by the responsibility I have been given by ACWA’s membership. I look forward to contributing to the Association’s ongoing success in furthering the interests of its members and, through them, those of all Californians,” said Tobin.

As vice-president, Director Tobin will serve as a member of ACWA’s leadership team that will guide the Association’s advocacy and collaboration with the Newsom Administration, California Legislature, Trump Administration and Congress to protect and promote California’s water interests.

ACWA vice-presidents normally become president of the Association for the two-year term following their vice-presidency and then serve as immediate past president for another two years. Consequently, Director Tobin will be involved at the highest level of ACWA leadership for the next six years.

Tobin brings a wealth of regional and statewide experience to the position, serving:

While Director Tobin is responsible for representing all members of ACWA in carrying out her leadership duties, her presence in ACWA leadership will ensure that issues of importance to San Juan Water District and the Sacramento region are addressed.