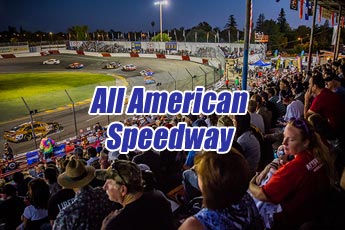 One of Placer County’s largest single day sporting events includes drivers from across the nation battling for a $100,000 purse. All six NASCAR Weekly Series local championships will be on the line as well with over 300 laps of stock car action on tap.

General admission tickets are available online at www.AllAmericanSpeedway.com Adult tickets are $35 while kids ages 6-12 are $25. Kids five and under are free.

The ARCA Menards Series West heads to Roseville for its penultimate race in the championship. The series utilizes 625hp stock cars which have competed at All American Speedway since 1977 including Saturday’s 23rd appearance. Bill McAnally Racing leads all teams with nine victories at its home track.

BMR also leads the 2021 battle with 16-year-old Jesse Love of Menlo Park, Calif. topping the standings in the No. 16 NAPA AUTO PARTS Toyota Camry on the strength of two wins. Love has battled with the series’ top rookie Jake Drew throughout the season. 2020 All American Speedway Late Model track champion Cole Moore of Granite Bay, Calif. ranks third in his rookie season followed by 2019 Madera Jr. Late Model champion and Napa’s Paul Pedroncelli, Jr. Jolynn “JoJo” Wilkinson will travel from Hueytown, Ala. to compete in the 150-lap event as one of several females in action. Japanese driver Takuma Koga is also expected.

Sacramento’s Eric Price will earn the Jaws Gear & Axle Modified title by taking the green flag for a 30-lap race. 2020 champion Jason Philpot and Colfax’s Ralph Bailey round out the top-three. Roseville’s Josh Whitfield has won nine times during the Riebes Auto Parts Super Stocks season to lead 2020 champion Andrew Peeler of Carmichael with a 25-lap event on Saturday.

The closest local battle will be in the NASCAR Division IV F4 division. Defending champion Ray Molina of Roseville has just a single win this year to pace his son Matthew Fuhs by only seven points entering their 25-lap race.

Youth will be represented in Saturday’s races as well. Auburn’s Colton Nelson will avenge a runner-up effort in the 2020 Mini Cup championship by wrapping up the 2021 crown on Saturday. El Dorado Hills’ Bella Thomsen won last year’s trophy and will finish second this season. In the Jr. Late Models, Loomis’ Kenna Mitchell, 15, has had a close battle with Fort Bragg’s Lane Anderson. Mitchell’s four wins give her a seven-point lead over Anderson. The Jr. Late Models use the same car specifications as the adults in the Berco Redwood Late Models, but utilize a restrictor plate and an RPM limiting rev chip for the safety of the young competitors.

The West Series session will also count as their qualifying session. Single car qualifying for the weekly competitors will follow before grandstand gates swing open at 4pm. Weekly Series main events begin at 4:15pm followed by pre-race festivities for the NAPA AutoCare 150 at 6pm.