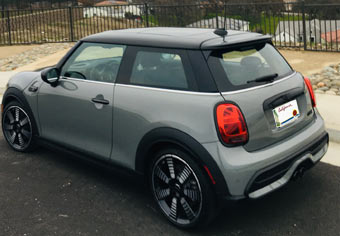 Roseville, Calif.- Two decades ago, the Mini Cooper was undraped and car buyers were enthralled by its funky, fashionable look.

It was the rare front-wheel drive subcompact that was more focused on being sporty and cute than making fuel efficiency its calling card.

The British-based car, made by the BMW Group, was trendy and innovative, right down to its sharp-edged wings becoming the symbol for the brand.

Today’s Mini Cooper no longer receives a lot of second glances when it’s out and about. The uniqueness has subsided, along with its sales figures.

It had been a while since we drove the stylish vehicle. We cruised around in the 2022 Mini Cooper two-door hard top for a week, and overall it was an enjoyable experience. Note that it’s also offered as a four-door hardtop and convertible.

This year the Mini Cooper arrived with a revamped exterior. The rear and front bumpers were revised, there’s a new wheel design, and the grille is slightly different as well.

Although slightly larger than the original, the Mini is still rather small. And that’s a good thing in multiple instances. It cruises around town with ease, corners sharply, and there’s no parking space that’s ever a true challenge.

Much like our first experience, we still feel the Mini Cooper delivers a good modicum of fun.

Before we get too carried away with its fun factor, let’s not forget the Mini Cooper can come up short in the performance realm. It’s not going to win many straight-ahead challenges.

The Mini Cooper base model has a 1.5-liter, three-cylinder engine that produces 134 horsepower and 162 pound-feet of torque. It goes a pokey 0-60 mph in 9.3 seconds and fuel economy (27-37 mpg) is nothing to brag about for a subcompact.

Other than a general lack of space, which is typically the case in most subcompacts, the Mini Cooper interior is just fine. It has a stylish and sensible layout that includes a standard 8.8-inch touchscreen that makes sense and doesn’t require a deep dive in the manual to master.

It has standard satellite radio, Bluetooth, USB port, and a six-speaker sound system. But annoyingly, Apple CarPlay integration is optional and there’s no support for Android Auto.

Cargo space is minimal at 8.7 cubic feet and the back seat is a pain to enter and exit. A normal sized adult will not enjoy squeezing in or sitting in the rear seats.

Because it’s been around for two decades, the Mini Cooper can no longer live off its unique appearance. Car buyers got used to it and now they are probably looking for more value since the cute tag has worn off.