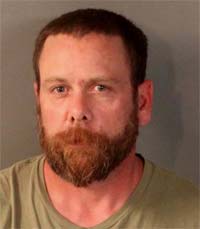 Barricaded Self Inside Stonecrest Drive Home

Roseville, CA- At 9:15 a.m. today the Roseville Police Department was assisting Placer County Probation with a probation search. The subject they were attempting to contact was Kelly Bronson (12/23/1974) who was on felony probation for weapons offenses.

When the officers initially made contact, the subject fled back into an unknown area inside the house. Officers fell back and set up a perimeter around the residence. For several hours Roseville Police attempted to make contact with the individual. There was strong suspicion the individual had access to firearms.

In accordance with type of incident, the Police Department activated the:

Through many avenues, the Police Department made several attempts to open the line of communication with the individual. It was established he was home alone. The houses immediately surrounding his home were evacuated for safety purposes. A nearby school was also evacuated and the students were sent home early. No students were injured during the incident and no issues occurred on the campus.

After many attempts to contact the subject, the Police Department made the decision to breach the house, in an effort to communicate with this individual. While searching the house, Officer made contact with Mr. Bronson who was taken into custody without incident.

Fortunately this ten hour standoff ended with no injuries.