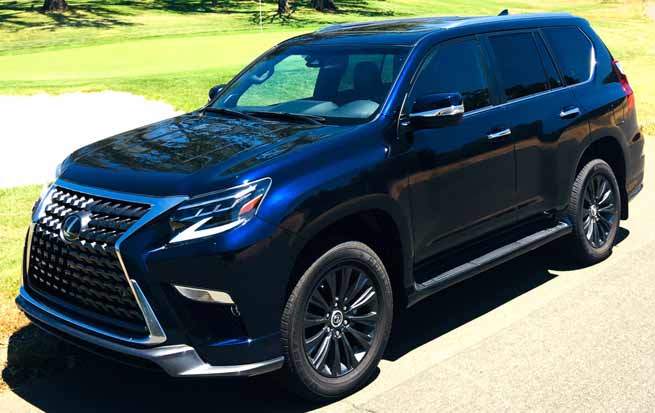 Roseville, CA- Although it has added a spindle grille and headlight designs, the truck-like Lexis GX 460 is still an old-school, three-row SUV that remains outdated.

The midsize luxury SUV is not all that different from 10 years ago when its last major redesign took place. While the 2021 Lexus GX 460 has remained mostly stagnant, much of the competition has evolved over that past decade, pushing the Lexus further from the top.

The GX does feature some luxurious amenities and the ability to conquer trails better than ever with its relatively new optional off-road package.

Old school is apparently enough for many people. U.S. sales of the GX has remained steady for the past six years. Sales were 28,519 for 2020, marking the sixth year in a row that GX sales have not dipped under 25,000.

Technology is one of the primary areas where the GX 460 needs attention. Rivals in the luxury SUV class are more sophisticated and cutting edge. Interior space, poor fuel economy and driving manners are among the issues with this luxury SUV, which has two trim levels (Base, Luxury).

The all-wheel drive GX 460 has rugged characteristics that allow it to operate well in off-road situations, one of the vehicle’s primary selling points. It’s equipped with standard hill-descent control, and adaptive variable suspension that’s capable of raising the vehicle for additional clearance.

The Luxury off-road package trim ratchets up the GX experience on alternative terrain. It includes Crawl Control, an off-road cruise control system that can regulate speed and allow the driver to focus on steering and choosing terrain.

The package also has Multi-Terrain Select traction system, a transmission cooler, fuel tank skid plate, and a terrain monitor that provides a view of what’s beneath the SUV.

The GX 460 has one engine, a 4.6-liter, V8 that’s paired with a six-speed automatic transmission and generates 301 horsepower and 329 pound-feet of torque.

We found the luxury SUV lumbered a bit in certain driving situations. The GX goes 0-60 mph in a respectable 7.4 seconds, but gets only 15-18 mpg. The towing capacity is strong at 6,500 pounds.

There’s no greater example of GX’s old-school qualities than the interior. It has a small embedded touchscreen and still doesn’t offer standard Apple CarPlay and Android Auto integration.

It also has a voice recognition system that’s less advanced than what most of its competition offers. Other issues include poorly located stereo controls, lousy access to climate control, and a tailgate that swings out instead of folds down.

Leg and head room are excellent for the driver and all occupants of the first two rows. But the third row is tight and only suitable for young kids.

The cargo area is small at 11.6 cubic feet behind third row. It does increase to 46.7 cubes with the third row down, yet the floor isn’t flat, making it more difficult to adequately store certain items.

The 2021 GX 460 is showing its age. While it’s a great off-road vehicle, it’s lack of interior sophistication keeps the GX brand from being among the best in class.