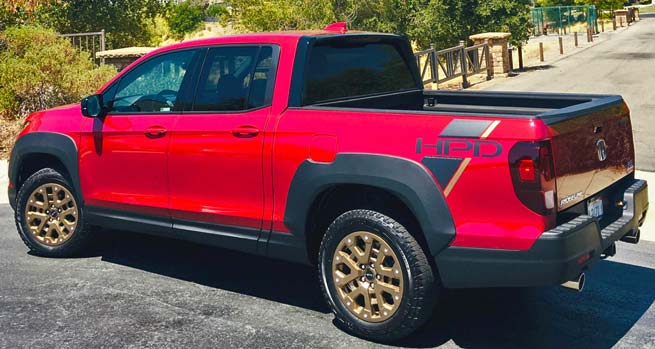 Cross between an SUV and a truck

Roseville, Calif.- Since its inception 16 years ago, the Honda Ridgeline has always been different, so different that many traditional truck lovers won’t even give it consideration.

Its longtime calling card remains this: it’s a truck for people who really don’t like owning a truck.

The Ridgeline drives more like an SUV than a traditional truck. That’s because it’s built on a unibody design rather than a more traditional body-on-frame setup, and has a fully independent suspension. The combination gives the Ridgeline more ride comfort in every-day driving and less noise isolation than most of its rivals.

The 2021 Honda Ridgeline is a second-generation model that was introduced four years ago. Since then, changes have been implemented, but typically not major ones. The latest edition of the Ridgeline features a restyled, squared-off front end and new rear bumper with dual exhaust.

Despite its many upsides, critics say the Ridgeline can’t match the rugged off-road capability that rivals like the Toyota Tacoma, Chevrolet Colorado and Jeep Gladiator possess.

While true that it’s not as rough and tumble as most trucks in its class, the Ridgeline can go off-road for modest adventures, thanks to a 7.6-inch ground clearance, all-wheel-drive, and a terrain system suitable for snow, sand and mud.

Another knock against the Ridgeline is unlike other trucks that offer different body and cab styles, Ridgeline has only one – a five-seat Crew Cab.

Perhaps the coolest thing about the Ridgeline is it can be used as a cooler, It has a 7.3 cubic-foot trunk beneath the truck bed that can accommodate an 82-quart ice chest and has a drain plug, so it’s ideal for tailgating. It also has 2.9 cubic feet of storage space beneath the rear seats that lift up.

The truck has a two-way tailgate that opens straight back like a traditional truck, or swings out from the side. Towing capacity is a modest 5,000 pounds, and the payload maxes out at 1,583 pounds.

The Ridgeline’s cargo bed is smaller than the competition at 5-foot, 4-inches, but it’s wide. This allows the truck to haul 4-foot-wide sheets that lay flat and don’t need to be propped up against the wheel wells.

There’s only one engine, a 3.5-liter, V6 that produces 280 horsepower and 262 pound-feet of torque, and is paired with a nine-speed automatic transmission. The Ridgeline can travel 0-60 mph in 7.3 seconds, a quick time for a midsize truck.

New this year is an upgraded infotainment system with a tuning knob. The Ridgeline comes standard with an 8-inch touchscreen that’s relatively user-friendly and Apple CarPlay and Android Auto integration. Good leg and head room for five passengers and a sizable center console are two more interior pluses.

If a traditional pick-up is not your thing, a cross between an SUV and a truck like the 2021 Honda Ridgeline might be the way to go. It’s handsome looking, possesses some unique qualities, and is offered at a reasonable price.