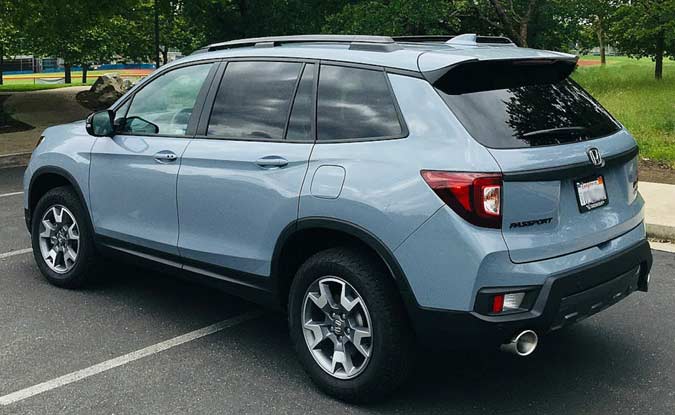 Roseville, Calif.- It had been a long time since we slipped behind the wheel of a Honda Passport.

How long was it? Approximately two decades since we last sampled the Passport, a stylish two-row midsize SUV. That’s because the Passport went away in 2002 and Honda didn’t bring it back until four years ago.

It appears Honda preferred to recycle the Passport name rather than create an all-new one. Whatever the reason, the revived Passport has done better than the original in its first showing, which only lasted eight years before it got shelved for the new Pilot.

The Passport rebirth has it shorter and taller than the company’s largest SUV, the Honda Pilot, a well-designed and popular three-row crossover. Another difference is the Passport is a little more off-road friendly than the Pilot, sitting 8.1 inches off the ground.

One can take the Passport off road, yet don’t get too daring. The optional all-wheel drive needs to be added and still it shouldn’t be driven over rugged terrain. Note that the Passport doesn’t have locking differentials, all-terrain tires, skid plates, or low-range gearing.

The 2022 Honda Passport has updated styling, added the new TrailSport trim (dropping Sport and Touring models), and still remains closely associated with the SUV that was reintroduced four years ago.

Among midsize SUVs, the latest Passport gets high marks in a number of areas. The knock against it is the cost – starting at roughly $40,000 – making it one of the priciest in its class.

Unlike much of the competition, the Passport has no turbocharged engine choices. All three of its trim models (EX-L, TrailSport, Elite) have the same engine, a 3.5-liter, V6 that generates 280 horsepower and 262 pound-feet of torque.

The Passport is paired with a nine-speed automatic transmission and has fairly good performance, going 0-60 mph in 6.8 seconds, among the quickest times in its class. It gets 20-25 mpg and equipped with AWD can haul up to 5,000 pounds.

We found the Passport a pleasing SUV to drive in all situations. It’s nimble enough to maneuver well in tight parking areas and handles itself well on narrow country roads where a good feel for the pavement is greatly appreciated. The ride is quiet and it absorbs bumps well.

Overall, the well-designed cabin has lots of upside. It’s roomy for all five passengers, has strong technology, a generous amount of soft-touch surfaces, excellent storage, and some clever areas to stash items.

The Passport comes standard with an 8-inch touchscreen infotainment system that can be quickly grasped. It also has some handy knobs and buttons that are preferred here for convenience.

There’s no issues with the seating – front or back row. There’s solid head and leg room and the comfy seats will be appreciated on long drives.

The cargo area is huge at 41.2 cubic feet behind the second row and expands to 77.7 cubes when the seats are folded to the floor.

The 2022 Honda Passport gives the company another very capable SUV. It’s strong in many areas and it would be no surprise here if sales continues to climb.