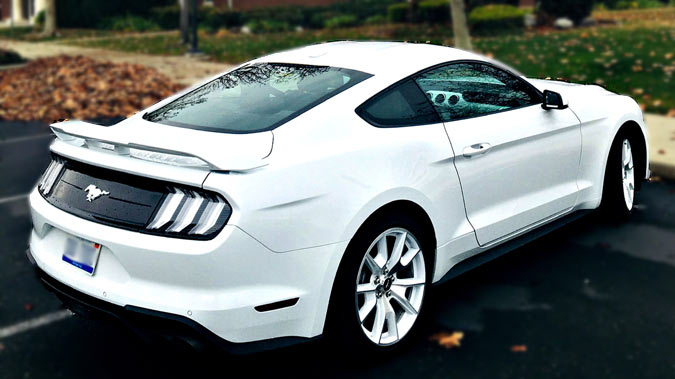 Roseville, Calif.- The Ford Mustang has truly been one of America’s iconic cars for the past 58 years. But sales indicate its popularity could be waning.

Despite the sales slide, the essentials remain virtually the same for the venerable Mustang. It’s still a performance-laden muscle car that’s tons of fun, affordable and sexy. And though muscle cars aren’t known as being high tech, the Mustang gets good marks for its interior features.

When introduced, the Mustang quickly became a car for people who craved performance and wanted to be noticed. We observed people checking out our attractive ride, thanks in part to the fetching color Ford calls Oxford white. The satisfying engine growl still draws attention and so does the agreeable price tag (roughly $27,500) of the base Mustang.

There has never been an issue of mistaken identity with the Mustang. It still features a long hood, tri-bar taillights and sloping fastback, which combine to give it an aggressive appeal. Rivals have come and gone (and returned again) – most notably the Chevrolet Camaro. The Dodge Challenger also remains another muscle car competitor.

Performance is typically the starting point for anyone interested in purchasing a Mustang. For pure speed, the optional Mustang GT is the best choice. The engine is a 5.0-liter, eight-cylinder that generates 450 horsepower and 410 pound-feet of torque. It goes 0-60 in a brisk 4.6 seconds. Note that this year the V8 engine loses 10 horsepower and 10 pound-feet of torque.

Both the EcoBoost and GT models come standard with 6-speed manual transmission (10-speed automatic is optional) and are available as both a coupe and convertible.

Fun is the term that typically comes with driving a Mustang. Even without the optional high-performance summer tires, the Mustang takes corners well and provides impressive stability and feedback for the driver. The advanced driver safety features include forward collision mitigation, blind-spot monitoring, lane keeping assist, and automatic high beams.

The Mustang cabin features modern convenience and has a smart design. The controls are strategically placed, many of them conveniently located on the steering wheel. Ford’s Sync interface has good voice controls, an 8-inch touchscreen, Apple CarPlay and Android Auto smartphone integration.

Despite being a sports car, the front seats provide terrific support and will be just fine on any extended trips. The same can’t be said for the back seat where only children will find any true comfort due to the confined leg room and overall space. The wide cargo area measures 13.5-cubic-feet and is enough to fit two golf bags.

The 2022 Ford Mustang stands out for its performance and style. Even though sales dipped in recent years, it remains an iconic car that catches one’s eye. It’s hard to beat if a classic muscle car is the choice of vehicles.