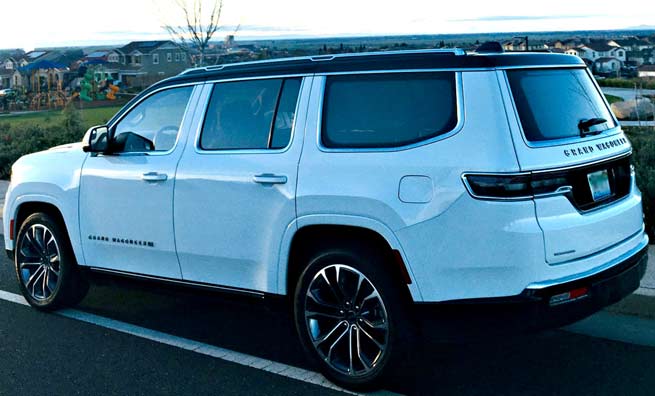 Roseville, Calif.- The Wagoneer and Grand Wagoneer. These two behemoths, full-size sport utility vehicles are a product of Jeep.

So, why is there not a single Jeep badge to be found on either one? There’s nothing on the hood, tailgate, dash or steering wheel. Even the owner’s manual and window sticker are devoid of the name Jeep.

While Jeep has clearly created the 2022 Wagoneer and its more upscale cousin – Grand Wagoneer, apparently it wants these large, three-row SUVs that can carry eight passengers to stand on their own as separate luxury vehicles.

We scratch our head at the absurdity because if someone wants to poke around on the Jeep website the Wagoneer “twins” do appear. Well, enough about the mysterious ways of Jeep.

If one has been around a while, the Grand Wagoneer name should come to mind. It was a station wagon with distinctive wood side paneling that was sold between 1963 and 1991. And it was definitely manufactured by Jeep.

In this review, we will primarily focus on the Grand Wagoneer, a flagship SUV that has the task of taking on a luxury class that includes heavyweights like the Range Rover, Mercedes G-Class, Lexus LX, Cadillac Escalade, Lincoln Navigator, and BMW X-7.

The competition is fierce. And the Grand Wagoneer also has an in-house competitor. The Jeep Grand Cherokee L is another large SUV with three rows that was introduced in 2021.

It also has a huge cargo area, measuring 27.4 cubic feet behind its third-row seats. The storage space grows to 70.8 cubic feet with the third row folded down and a massive 116.7 cubes with both rows to the floor.

The interior has a 12-inch center touchscreen, a 12-inch digital cluster display, a 10-inch lower touchscreen to control the seats and climate control, and the passenger can use their 10.25-inch screen for entertainment.

In our opinion, that’s far too many screens and displays to be dealing with while trying to keep a large SUV between the lines. There are too many items to search for and fiddle with for the driver. We even had a problem locating a button that’s rather important – the one that pops open the fuel tank covering.

We do like that second-row passengers have a 10.3-inch touchscreen between the captain’s chairs and a rear-seat entertainment system with a pair of 10.1-inch tablets that can stream videos, movies, and live television via Amazon Fire TV.

The Grand Wagoneer doesn’t lack for power. The engine is a 6.4-liter, V8 that produces 471 horsepower and 455 pound-feet of torque and is paired with an eight-speed automatic transmission.

The large SUV uses the body-on-frame underpinnings of the Ram 1500 pickup truck. Because its truck based, the Grand Wagoneer has been known to lean and sway through turns, although we didn’t experience any issues on a ski trip over mountain passes.

The Grand Wagoneer is capable of off-roading. It has five adjustable ride heights and an off-road setting with a maximum 10-inch ground clearance. While it’s not made for careening over boulders, the Grand Wagoneer can do fine in the backcountry.

We question whether the 2022 Grand Wagoneer will be able to hang with the class leaders. It lacks the same panache when up against the likes of Mercedes, Lexus, BMW, and Cadillac. Yet just like its rivals, it goes for a hefty price – between $87,000 to $104,000.