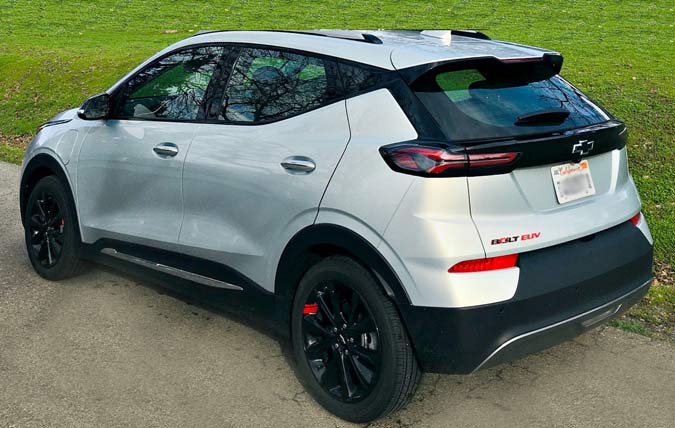 Performance, design, and appeal just a few of the highlights

Roseville, Calif.- The folks at Chevrolet had success with the original version of the Chevy Bolt, so why not tweak it and see if it can duplicate that success?

Some observers feel that’s exactly what Chevy is doing with its new electric SUV.

The company watched sales reach an all-time high for the Bolt last year when it also debuted an offshoot of its subcompact electric vehicle, introducing the Bolt EUV.

There are similarities between the two EV vehicles, primarily they both deliver a peppy ride and have good mileage range. But the differences are easy to assess. The 2023 Chevrolet Bolt EUV is a subcompact SUV with far more versatility than its older sibling. Despite its more appealing aspects, the EUV nearly matches the original Bolt in price.

Speaking of price, last year’s version of the Bolt EUV went for roughly $33,000. Chevy cut the price this year by a sizable margin, a budget-friendly $27,900. Introduced late in 2016, the Bolt sedan has a starting price of approximately $26,000 and hopes to increase sales a year after it spiked to 38,122.

The Bolt EUV can’t match the Bolt’s range of 259 miles, but it comes close at 247 miles before a charge is required. Using Level 3 public DC Fast-Charging, the EUV’s 65-kWh lithium-ion battery can reach around 95 miles in 30 minutes. Using a 240-volt outlet, it can be fully charged in about 10 hours.

Other than price, there’s not much difference in this year’s EUV and the 2022 version. The 2023 EUV does offer a new attractive, sporty Redline Edition package. It has a distinctive black and red Bolt EUV badge on the rear hatch, red accent decals on the outside mirror, and 17-inch black painted aluminum wheels with red accents.

The front-wheel drive EUV’s overall performance came as a surprise, providing more power than we expected. The electric motor generates 200 horsepower and 266 pound-feet of torque. The EUV weighs between 3,680 to 3,715 pounds and has been clocked going 0-60 mph in 7.1 seconds. It can zip around town and deliver the necessary acceleration required in freeway driving.

The Bolt EUV has responsive steering, agile handling and is fun to drive. We loved the regenerative braking when placed in low mode, giving it one-pedal driving. This gives the driver the ability to speed up and completely slow down without using the brake pedal. Super cruise driving is an option with the Premier trim. It allows for hands-free driving on divided and compatible highways, a first for Chevrolet.

The Bolt EUV cabin is smartly designed and has good cargo room and passenger space. The technology is strong, yet not overwhelming for people who prefer more simplicity and some physical buttons, which the EUV employs. It comes standard with a 10.2-inch touchscreen, wireless Apple CarPlay and Android Auto integration, Wi-Fi hot spot, wireless device charging, satellite radio, HD radio, and two USB ports.

The interior also has an 8-inch digital gauge cluster behind the steering wheel that provides battery information, power output and driver efficiency details.

While seating is far from luxury like some of the EUV’s competition, it’s roomy enough in both the front and back seat. Front-seat occupants are accorded good head and leg room, but that doesn’t transfer totally to the rear seats, where headroom can be is snug for 6-footers. Cargo space measures 16.3 cubic feet behind the back seat and 56.9 cubes with the rear seat folded to the floor.

Thanks to its performance, smart interior design and its overall appeal, the 2023 Chevy Bolt EUV has a bright future.