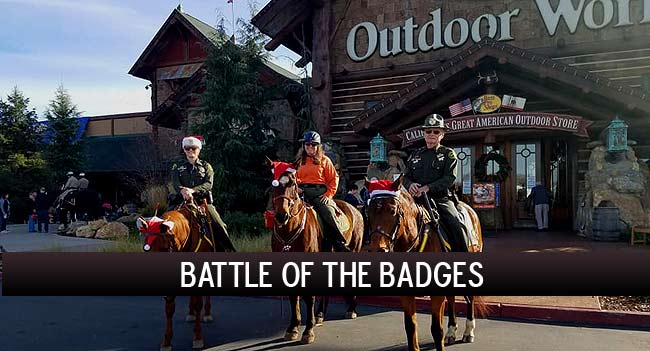 Raising funds for those in need

Roseville, CA- This Wednesday, December 18, first responders in Placer County will compete to see who can raise the most money for those in need this holiday season.

For the first time ever, Battle of the Badges will pit Roseville Police, Roseville Firefighters, Auburn Police, Auburn Firefighters, the Placer County Sheriff’s Department, including Sheriff Devon Bell, and California Highway Patrol Officers against each other, making it a county-wide competition.

Each team will ring the iconic Salvation Army bells outside of participating stores; Save Mart in Auburn, and Macy’s Galleria in Roseville, and Bass Pro Shops in Rocklin, and collect money for the nonprofit. The winning teams will take home coveted Battle of the Badges trophies.

This is a great community-wide event. Officers are able to connect with shoppers checking items off their holiday lists and help those who aren’t able to afford to give their families a traditional Christmas. Money raised will also go to support Salvation Army programs all year long. Salvation Army programs in Placer County include housing and feeding the homeless, assistance for low income families and seniors, and programs for children.

Locations: Battle of the Badges