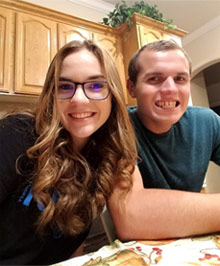 Roseville, Calif.- As I feel the sunshine peer in my window, I open my eyes to see a plate of two cinnamon rolls sitting on my bedside table. This is how I woke up almost every morning during the summer of 2017.

Aaron has definitely given me a fair share of stress, but he has also made me laugh hysterically and feel so loved. Two years ago, Aaron completed high school. At his graduation party, he took a picture with everyone who has helped get him and my family to where we are now. Teachers, aides, therapists, and friends – all these people have been alongside Aaron as he has grown and it has been amazing to experience.

Because of Aaron, I want to have a career in special education. I learned what autism is when I learned the ABC’s. In elementary school, my friends would ask why Aaron was plugging his ears or why he was making noises and I would simply tell my friends that Aaron has autism. More often than not, people would apologize. I always thought this response was strange – I would reply, “Don’t be sorry. That’s just him.” Thinking back, I now realize how that was pretty bold for a kid to deny an apology, but this is how I have always viewed my brother. He’s just him.

Aaron has opened my eyes to the possibilities of the world. Aaron has given me patience and understanding. Aaron has shown me unconditional love. My brother is an amazing human being that I can always count on to go shopping with or to get milkshakes with, or just to give me a big hug after a long day. Because of Aaron, I have gotten to meet people affected by the autism spectrum in one form or another: people with autism, their parents, their siblings, teachers, therapists, tutors; the list goes on. Undoubtedly, I have spent time talking to and being impacted by people with all sorts of disorders and disabilities, friends and families of these people, and the incredible folks that work with them.

In my eyes, people with disabilities are some of the bravest and most amazing people you will meet. I know how these individuals can struggle with things that we often take for granted, such as effectively comprehending and communicating. In a perfect world, no one would struggle or get frustrated trying to simply live their life, but unfortunately, that perfect world does not exist. I have sat by and watched my brother, friends, peers, and even strangers, go through hard times.

Although people with disabilities deal with more than enough battles daily, they are kind and amazing human beings who often times just need a little extra help. But they will help you too. These humans will embrace you and make you feel immense joy like you have never felt before. That’s why I want to be a special education teacher.

Thank you to my brother, Aaron, for making me cinnamon rolls every morning in the summer of 2017.

Updated: Emily Schofield of Roseville worked as a Paraeducator II in Roseville at Oakmont High School while also attending Sierra College full time. She now attends Sac State and looks forward to an exciting future. In her spare time, she enjoys music, travel, and spending time with her boyfriend.