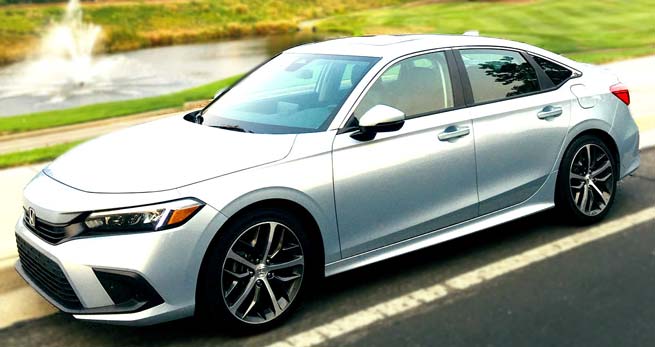 Roseville, Calif.- The 2022 Honda Civic looks a bit different and travels a little faster than this year’s model.

The Civic received a redesign for 2022 and delivers an even better overall package than previous years – and that’s saying a lot.

Historically, this longtime standout in the compact vehicle class earned its reputation for being well made, affordable, reliable and fuel efficient. Thanks to an optional turbocharged engine, the Civic is not just another compact sedan that plods along, it’s fast as well.

The turbo 2022 Honda Civic is capable of going 0-60 mph in 6.7 seconds, putting it in an elite class among non-luxury compacts.

There’s lots to pick from with a Civic because it’s available as sedan, hatchback, and formerly as a coupe. There are also four trim models (LX, Sport, EX, Touring).

The 2022 Civic received a makeover inside and out. Honda understands the need for change because there is plenty of competition. Among an impressive list of rivals are the Mazda3, Kia Forte, Toyota Corolla, Volkswagen Jetta, Subaru Impreza, and Hyundai Elantra.

The base engine for the Civic remains the same – a 2.0-liter, four-cylinder that produces 158 horsepower and 138 pound-feet of torque. It travels 0-60 mph in a respectable 7.9 seconds.

We much prefer the turbo engine, a 1.5-liter, four-cylinder that has even more power for 2022 – increasing to 180 horsepower and 177 pound-feet. of torque. The turbo model has good acceleration and still gets terrific gas milage (33-43 mpg).

The Civic interior is well thought out, possessing good space, lots of storage areas, and solid room for five passengers. Note that the sloped roofline hinders rear headroom a bit. The cargo room (14.8 cubic feet) is large for the class.

Changes for 2022 include a carbon mesh-bar that runs the length of the dashboard. Also new are black accents and surfaces that don’t leave or fingerprints.

The Civic’s standard 7-inch touchscreen infotainment system is located high on the dash, helping to keep the driver’s eyes on the road. Both Apple CarPlay and Android Auto integration are standard.

We would place the Civic’s ride quality between sporty and comfortable. A front-wheel drive vehicle, it features athletic handling and delivers a smooth ride on most road surfaces. It’s a fun car to hustle around town and do errands.

The Civic remains highly regarded and is known for its spacious cabin, strong ride quality, upper-end interior materials, and terrific handling. Regardless of which model one prefers, the 2022 Honda Civic is a high-level compact car that continues to reside at or near the top of its class.