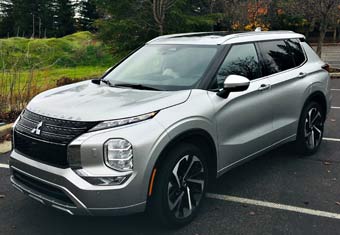 Roseville, Calif.- Forget about the many negative things that might have been written in the past about the Mitsubishi Outlander.

Thanks in part to Mitsubishi’s partnership with Nissan and Renault, the 2022 Mitsubishi Outlander is probably as good as it gets since making its 2002 debut as a compact sport utility vehicle.

There was no 2021 Outlander because the Renault-Nissan-Mitsubishi Alliance was still working on an extensive redesign. The extra year helped, because there’s lots of reasons to like the latest version of the Outlander.

Some might consider the new Outlander to be a knockoff of the 2021 Nissan Rogue, another compact SUV that went through a sizable redesign this year.

There is no mystery, the Outlander is based on the Rogue, sharing the same chassis, engine, major dimensions, and some additional mechanical features.

The Rogue has always enjoyed a solid reputation. Mitsubishi is hoping the revised Outlander travels a similar path to acceptance.

The most outstanding feature of the new Outlander is its rugged exterior. It has a great look, thick and powerful. The slightly longer and wider SUV has a flat roof, three vertical LED headlights, and T-shaped taillights. Its wheelbase has increased by 1.4 inches.

The alliance group upgraded the new Outlander just about everywhere. The cabin is a big improvement, utilizing more high-quality materials and a smart design to make it far more impressive than any predecessor.

The Outlander has been unique in the past, simply because of being a rare compact SUV that could transport seven people due to its third row. Only two competitors – Kia Sorento, Volkswagen Tiguan – possess a third row.

However, before going all in on the Outlander, also know that the third row has always been considered “just for kids.” Even though the remodeled 2022 Outlander has more interior space, the third row remains no place for anyone other than small kids.

Another previous criticism against the Outlander was performance – it was always sluggish. That hasn’t changed, either. Mitsubishi got rid of its underpowered V6 optional engine and now offers only a four-cylinder that’s still on the pokey side.

The front-wheel drive Outlander has a 2.5-liter, four-cylinder that generates 181 horsepower and 181 pound-feet of torque. It’s paired with a continuously variable transmission. The Outlander ES comes with all-wheel drive.

All versions of the Outlander, even the upgraded SEL Launch edition driven here for a week, have modest power, going 0-60 mph in 8.3 seconds. When one needs to hustle, quick acceleration is not happening. The Outlander fares better in fuel economy (24-31 mpg).

The new Outlander provides a better driving experience than in the past. Its handling is more agile and it corners fairly well for an SUV. Its standard safety features include forward-collision mitigation, blind spot warning and rear automatic emergency braking.

An upgraded Outlander includes the Mi-Pilot drive assist that offers an array of technologies, providing aid to active cruise control with stop and go, traffic-sign recognition, lane-keeping and centering assist.

AT A GLANCE – 2022 MITSUBISHI OUTLANDER

The first two rows of the Outlander are comfortable, featuring solid leg and head room. The cargo area is now a little larger at 11.7 cubic feet behind the third row of seats. It expands to 33.5 cubic feet when the third row is folded down and 79.7 cubes with both rows on the floor.

The standard 8-inch touchscreen is not a chore to master like some vehicles and we loved the thick steering wheel. Both Apple CarPlay and Android Auto come standard.

Maligned in the past, the 2022 Mitsubishi Outlander appears to be heading down a new path of respectability.