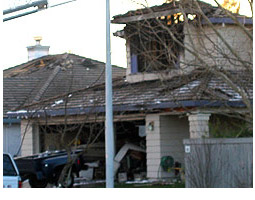 Roseville, Calif. – Shortly before 11:30 a.m. on Sunday, February 12, fire and police crews responded to a report of a small plane crash into a two-story residence in the 1300 block of Longfellow Circle, in west Roseville near Pleasant Grove Boulevard and Woodcreek Oaks Boulevard.  According to witnesses, the plane was flying above the residence and the plane crashed for unknown reasons.

The two-story residence was engulfed in flames. There is major structural damage to the home.  The one-story house next door had some exposure damage.  Fire crews contained the fire within approximately one hour.

Law enforcement personnel have made visual contact and confirmed two fatalities.  Personnel have not confirmed if the fatality was an occupant of the plane or the home.

A representative from the Federal Aviation Administration (FAA) is on scene.  Building inspection officials are arriving to inspect the stability of the structure.

An investigative team from the FAA is expected to arrive in Roseville on Monday, February 13, 2006.  The area surrounding the home is being secured as a crime scene to preserve evidence and protect area residents.  Law enforcement personnel will be on scene until the FAA arrives on Monday.