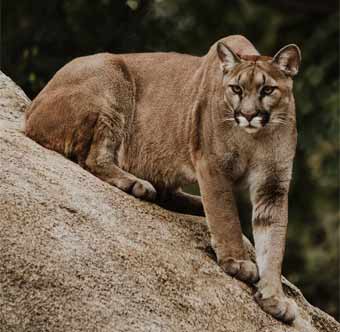 Roseville Police have heard about several sightings of a mountain lion in the Miner’s Ravine/Secret Ravine area-one in September, several in November and early December, and then no more sightings were reported until last week.

On the afternoon of  January 16, a resident saw a mountain lion on the trail near Secret  Ravine Parkway and Alexandra Drive.  No one has reported any attacks or aggressive behavior by the mountain lion.  The California Department of Fish and Wildlife (DFW) is responsible for wildlife management, and they say that mountain lions are common in California’s wild and open space areas.

Wardens encourage the public to be aware of the presence of mountain lions and take steps to avoid encounters, and they don’t take action against a mountain lion unless it’s shown dangerous behavior toward humans.  We’ve posted the Miner’s Ravine trail system with signs to make people aware.

The Department of Fish and Wildlife recommends the following steps to avoid encountering a mountain lion:

Don’t hike alone, and closely supervise children on the trails.

Don’t run from a lion, which could trigger its chase instinct. Instead, stand and face the animal. Pick up small children. Don’t crouch down or bend over-try to appear as tall and large as possible. Wave your arms and speak firmly in a loud voice. The idea is to convince the lion that you’re not prey, and that you might be a danger to it.

Fight back if attacked. The DFW says that people have used rocks, sticks, jackets, garden tools and even their bare hands to successfully fend off attacking mountain lions.

Immediately report all encounters or attacks to police. The Roseville Police are keeping the DFW posted about the mountain lion sightings in our area-please call us if you see a mountain lion, especially if the lion is showing any threatening behavior