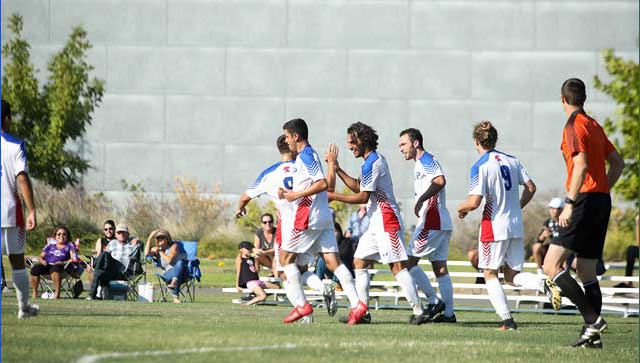 ROCKLIN, Calif. – The Jessup men’s soccer team hosted Sierra Nevada College for their home opener with no score after 45-minutes of play, but a second-half spark would put the Warriors on top to take it 4-0, as senior Omar Magana recorded a hat trick in his return to the pitch.

After a scoreless first half, the Warriors led 4 shots to the Eagles 2 but were unable to find the back of the net in the opening 45-minutes of play. But it didn’t take long for them to come alive in the opening of the second half.

Just five minutes in, Magana scored his first goal in a year after going out on injury in last year’s season opener and having to sit out the season. It wouldn’t be but 10 minutes later that the forward was fouled in the box as the Warriors went up 2-0 with a penalty kick good from the line.

But wait, less than a minute later he would score this third goal as he had a wide open look from the far center, placing it high right to record a hat trick to start the season.

With less than five minutes remaining, junior transfer Heriberto Trevino would seal the deal in a one-on-one with the keeper as the Warriors went up 4-0, opening the season with a shutout over the Eagles.

Still dominating in the shots column, Jessup would go up 9 shots to the Eagles 4 in the second half. In goal, senior Nick Garcia held down the posts with a save in each half.

The Warriors will start their five-game road series this weekend starting with Willamette University on Friday and Southern Oregon on Saturday.