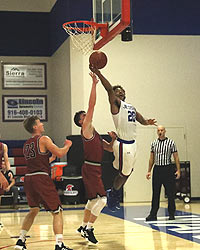 While the Warriors eventually proved to have too much size and speed for the Eagles to keep pace, red-hot shooting from distance kept the visitors from Southern California within striking distance much of the first half.

Red-hot might be an understatement, as the Eagles’ Nic Corl began the contest with three consecutive made three-pointers and added his fourth just a couple possessions later. Despite Jessup being heavily favored coming into the game, it was West Coast Baptist soaring to a 22-14 lead.

“I thought we did a terrific job bringing our energy and enthusiasm with the exception of the first five minutes of the game,” said Jessup head coach Lance Von Vogt, who is in his fifth season at the helm. “We have to be better at the start of the games.”

Following a timeout, the Warriors really got things popping.

Thanks to a dominant Keith Phillips and Tyras Rattler Jr., Jessup would outscore their opponent 30-2 over a span of about seven minutes. Phillips was especially dominant in the paint, using his size to out-strength the much shorter Eagles postmen, capping off the run with a monstrous poster jam in transition.

“It is great to see everyone contribute in these early non-conference games,” said Von Vogt.

A late first-half charge gave the Warriors a 59-39 advantage heading into the halftime break.

Not missing a beat, Jessup got the second half started right where they left off. Long arms and a full-court press allowed the quick-footed Warriors to get out in transition for easy layups and jam sessions.

Led by none other than Phillips, Rattler Jr, and Antonio Lewis, the Warriors forced the Eagles to commit 13 turnovers in the second half.

With few opportunities to work on their half-court offense, the Warriors did a much better job of valuing the ball, which made for a very happy head coach.

Said Von Vogt, “I was especially pleased with our ball security finishing the game with only 8 turnovers. If we continue to take of the ball in that fashion then we will have a chance to be a pretty efficient offense.”

West Coast Baptist was unable to make any kind of late-run, as the Warriors hit the triple-digit mark with more than nine minutes remaining. The team made history by scoring a program record 132 points, surpassing the previous record of 122 set last season.

The final buzzer would sound with the scoreboard showing 132-74. Rattler Jr. led the Warriors going 9-9 from the field with 20 points and four rebounds, while Lewis also added 20 of his own. Phillips chipped in another 18. The Eagles were led by Ian Russell with 21 points.

The undefeated Warriors will host the annual Bill Holtz Warrior Classic next week with their first contest starting Friday at 7 pm against the Simpson Red Hawks.