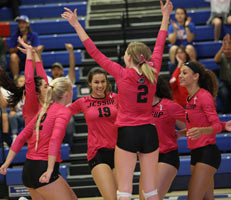 It was a night that was bigger than volleyball as the Warriors held their annual Breast Cancer Awareness Game. Head coach Shasta Millhollin said, “Our Dig Pink match is something that we look forward to every season. There is something very special about dedicating the match to a greater cause.”

The Warriors trailed for the majority of the first set as they were down 7-3 to start. But as the set lingered on the Warriors remained resilient continuing to chip away at the Hawks lead and eventually took the 20-17 advantage after a 6-1 run. From then on there was no looking back for the Warriors and Vendela Williams put the finishing touches on the set as the Warriors took it 25-21.

In between sets, coach Millhollin told her team, “To press the restart button and get back to basics.”

The message was well received and the Warriors came out firing early as they led 7-2. They would continue to grow their lead to 19-10 before the Hawks put together a run of their own making things close as the Warriors clung to a 22-20 lead. The resiliency the Warriors showed in the first set came through once again as they scored the sets final three points to win 25-20.

Seeking to close things out in set four the Warriors and Hawks traded blows early as the score was tied 6-6. The Hawks scored the initial point to break the tie, however, it was the Warriors who quickly responded and took the lead for good. The Warriors would extend their lead 22-15 but the Hawks wouldn’t go quietly as they scored four straight points to make things interesting down the stretch. With the Warriors ahead 24-21, Michaela Zapata would put the cherry on top as her final kill pushed the Warriors to victory, 25-21.

Excited with how her squad played after the historic win, coach Millhollin ended by saying, “As a coach, I could not be more proud of our ability to completely execute our game plan. To beat SDCC both times this season is amazing. This is the first time ever that we have beaten them both times. They are a solid well-coached team that plays with a lot of heart and fights every point.”

Williams had one of her best games of the season recording kills on a regular basis finishing with a team-high 15. Zapata also had a great offensive performance recording 10 kills herself. Taylor Jackyset a new season high for herself with three service aces while Alicia Borges continued to show her talents form the service line with two. Brianne Whitt ended the game with 23 assists and Madison Pelham with 14. Defensively, Taylor Jacky, Alex Demaranville-Robinson and Kacey Berger all had a superb night as they had 20, 19 and 15 digs respectively.

The Warriors will be back on their home floor on Saturday, October 13th to host the Vanguard Lions at 3 PM.