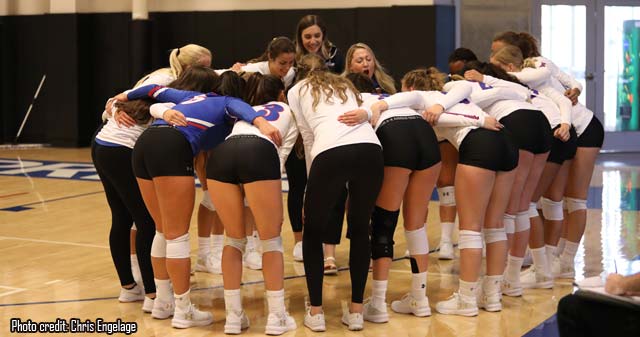 ROCKLIN, Calif. – Starting the season off with a home tournament, the Jessup women’s volleyball team played a pair of matches taking on Simpson University and Pacific Union, dominating three-sets-to-none in both to start their fall schedule off strong 2-0.

The Warriors took on former conference rival, the Simpson Red Hawks in their season opener of the William Jessup Invitational winning the match in three-consecutive sets (27-25, 25-21, 25-15) to start the fall off strong.

After a back-and-forth affair, it was Vendela Williams who put the finishing touches on the first and second sets as the Warriors squeaked out the narrow wins 27-25 and 25-21. The third and final set was capped off with an ace by Taylor Jacky as the Warriors pulled away late winning 25-15 to seal the deal.

Michaela Zapata led the Warriors with 8 kills, and close behind were Williams, Taylor Tarble, Ashanti Grayer all with 7. Jessica Williams led the way in assists with 21 while Brianne Whitt tallied 17 in the Warriors new offensive set.

The hot streak continued for the Warriors as they swept another former conference rival in the Pacific Union Pioneers (25-15, 22-25, 25-19) to start the season 2-0 overall with a triple threat set for tomorrow’s matches.

Vendela, again, had a great performance leading the team with 8 kills, and senior Makenzie Reeder-Esparza came in one shy of her teammate with 7. Jessica led the team in back-to-back games appearances with 18 assists in game two to total 39 overall.

Following her squads 2-0 performance, head coach Shasta Millhollin said, “Today was a great day. Our team motto is ‘WE>me’ and we definitely put the team first and got the job done together. Starting off the season 2-0 is huge for us and we are pumped to carry that into our 3-match day tomorrow. We are the proudest of our relentless optimism on and off the court.”

The Warriors will be back in action at tomorrow taking on Antelope Valley to start the day (9 am), followed by Northwest Christian at 1 pm and closing out the tournament against Southern Oregon at 5 pm.