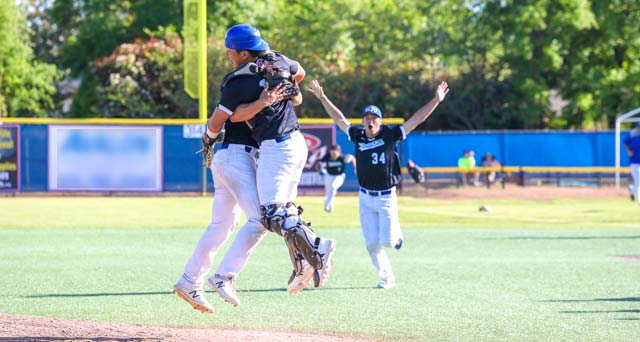 Rocklin, Calif. – Wlliam Jessup Warriors recently beat Arizona Christian (9-8, 9-5) to complete the series sweep and become the Golden State Athletic Conference regular season champions. After winning just 10 games last season, the No. 8 in the country Warriors are 34-13 overall and 26-7 with their final series of the regular season ahead of them and ticket punched to the conference tournament to follow.

Coach Jake McKinley reflects on today’s accomplishment saying, “I can’t put into words how proud I am of everyone in our organization. It’s family. This was earned through hard work and a selfless approach.”

Game one started off with the Warriors trailing the Firestorm as ACU put up 3 runs in the second inning and a single run in the third. However, the Warriors would cut into the lead in the bottom of the 4th after a single by Connor Braun, followed by Josh Duitsman hitting one over the fences, bringing the score to 4-2.

Arizona would battle back, scoring 2 runs of their own putting the scoreline at 6-2.  Jessup, not to be outdone, would put up a 4 spot to tie the game.  The Warriors would get things rolling thanks to back-to-back singles by Sam Curtis and Will Law.  Austen Swift would score Curtis, reaching on a fielders choice. With two on the bases, and base a 3-run homer from Braun would even up the score at 6 apiece.

Jessup would stay hot in the bottom of the 6th starting off with Kawai Takemura drawing a walk. Curtis would follow up with a single to the shortstop, advancing himself to second and Takemura to third on a throwing error.  After ACU’s decision to intentionally walk Swift to load the bases, Cal Koga would draw a walk to advance all runners, bringing Takemura across the plate.  The final two runs of the inning came from a Starick hit by pitch, bringing around Curtis and a Braun walk to round out the inning by scoring Swift.  The scoreboard at the end of 6 innings saw the Warriors in favor, 9-6.

The Firestorm would manage to bring across a run in the 8th to narrow Jessup’s lead, and once again in the 9th to bring the ballgame to 9-8.  But Jessup was able to get out of the jam, striking out the last batter of the game with the bases loaded.

A strong showing from Tyler Fujimoto on the mound would give him his 8th win of the season. Curtis earned the save by closing out the last 2 innings for the Warriors.

Game two would start with a bomb from Jessup’s leadoff hitter, Law, to put the Warriors ahead 1-0 in the bottom of the first.  ACU would answer back in the top of the 3rd with a run of their own to tie up the game 1-1.

Not staying tied for long, the Warriors distanced their lead in the bottom of the frame as Swift started things off  singling through the left side, while Koga would follow with the same advancing Swift to third.  Joey Torres, pinch running for Koga, would steal second setting up runners in scoring position for Starick’s 2-RBI single up the middle.   Starick would make his way to scoring position with a stolen base and throwing error by the Firestorm.  A pair of walks for Braun and Pastora would load the bases for Duitsman who would reach base on a fielder’s choice, scoring Starick.  The inning would end with the Warriors at a 4-1 advantage.

In the top of the fourth, ACU would chip at Jessup’s lead with a solo run to put the scoreboard at 4-2, but once again, the Warriors would answer back in the bottom of the inning. Curtis would get the offense started with a single to center field, followed by a throwing error by the pitcher that would place him on third.  Law singled to right, scoring Curtis and Swift would tally the same.  After a ground out, which would advance both runners to scoring position, Starick would single to center field scoring Law and pushing Swift to third.  Another single from Braun would bring Swift home, distancing Jessup’s lead to 7-2.

In the bottom of the 5th, Takemura’s single was quickly followed by a Curtis double, putting both runners in scoring position.  Takemura would score on a wild pitch that would also advance Curtis to third.  Koga’s sac fly to left field would be enough to bring home a speedy Curtis, finishing off the Warriors offense for the day and ending inning at 9-2.

The Firestorm would score 3 runs in the 6th but was shut out in the 7th, securing the 9-5 win and conference title for the Warriors.

Tristan Prybylinski would earn his 7th win on his Senior Day, as Pastora earns his first save pitching the final 3 innings.

Looking forward, Coach McKinley states “It’s important to enjoy this moment but also understand there’s a lot of baseball to be played. I’m looking forward to continually working hard with our guys.”