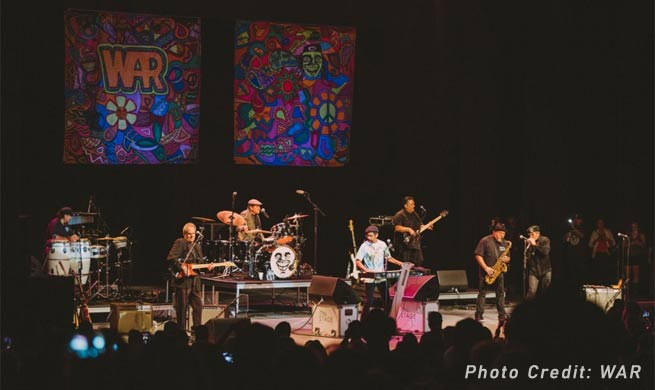 Rocklin, Calif.- WAR is coming to Rocklin’s Quarry Park Amphitheatre on October 8, 2021 for a night of funk n’ fun. No soundtrack from the 1970’s soundtrack is complete without a little WAR.

Tickets are on sale now with prices starting at $45. Doors open at 6:00pm with the show to kick off with special guest at 7:00.

War is an American funk/rock/soul band from Long Beach, California, known for several hit songs (including “Spill the Wine”, “The World Is a Ghetto”, “The Cisco Kid”, “Why Can’t We Be Friends?”, “Low Rider”, and “Summer”). Formed in 1969, War is a musical crossover band that fuses elements of rock, funk, jazz, Latin, rhythm and blues, psychedelia, and reggae.

According to music writer Colin Larkin, their “potent fusion of funk, R&B, rock and Latin styles produced a progressive soul sound”, while Martin C. Strong calls them “one of the fiercest progressive soul combos of the ’70s”.

Their album The World Is a Ghetto was Billboard’s best-selling album of 1973. The band transcended racial and cultural barriers with a multi-ethnic line-up.