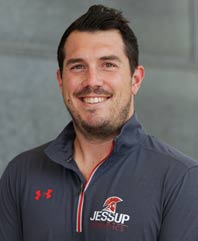 ROCKLIN, Calif. – After the best season in Jessup baseball history, Trevor Paine was promoted to Associate Head Coach in the fall of 2018 and will be starting the 2019 campaign at the helm of the program after the announcement of Jake McKinley’s departure.

“Trevor is primed and ready for this position as Jessup’s next head baseball coach,” athletic director Lance Von Vogt said. “He’s talented, experienced, innovative, energetic and won’t be outworked. Trevor has impressed during his 18 months at Jessup to make this a clear decision in our succession plan for Jessup Baseball. I am especially excited to know that Trevor will continue to build where Jake left off in regards to the Christian mentorship and leadership that our student-athletes receive on a daily basis.”

Hailing from the Warriors hometown, Paine grew up in Rocklin and attended Jesuit High School before playing for the Sacramento State Hornets.

Paine commented on his next chapter with the Warriors, “I can’t say how blessed I am to be named the next Head Baseball Coach at William Jessup University. Growing up in the Rocklin/Lincoln community, I am reminded every day what makes this place so special and I am excited to continue to call this home.”

This past season Paine was an integral part of the coaching staff that led to a record-breaking season for the Warriors capped by a GSAC Regular-Season Title, GSAC Championship trophy and the program’s first-ever NAIA Opening Round hosted on their home field.

His first season working with McKinley was at Menlo College in 2016-17 where he garnered GSAC Player of the Year and Pitcher of the Year, along with 5 All-GSAC award winners and an NAIA All-American. Prior to that, he spent two years at Southwest Minnesota State and before that he started his career in coaching at his alma mater, Sacramento State in 2012 where he was a part of the staff that led the team to their first NCAA Regional appearance in school history.

“For the last 3 years I have had the privilege of working with Jake McKinley, and although it hurts to see him move on, I could not be more excited for his well-deserved opportunity,” Paine commented. “He has set this program up for continued success and I look forward to the challenge of making William Jessup a destination university for college baseball players around the country.”

McKinley announced last week his departure to the Major Leagues, taking a pitching coordinator position in the Milwaukee Brewers organization.

“No Athletic Director likes losing a star coach a month before the season begins, but God has uniquely prepared us for this situation with the presence of having Trevor in-house and ready to step into the head coaching role,” Von Vogt concluded. “Our baseball program is in great shape to become even better and move forward.”

The Warriors will take the field Jan. 25th for their first series of the season hosting Oregon Tech as they look to continue their success in building a Championship program.