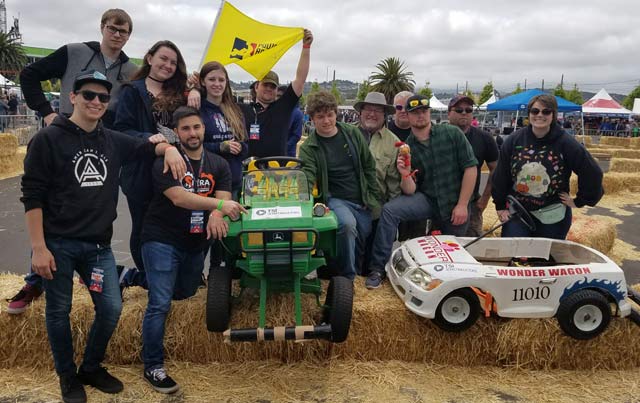 The Sierra College student robotic team placed second in the world at RoboGames with the Autonomous Firefighter robot and through the process challenged themselves to solve technical problems using methods that will serve them well in their careers.

There were 13 registered teams competing in the firefighting event, including teams from Indonesia, Egypt, Poland, Germany and the United Kingdom, according to Tony Osladil, Mechatronics Instructor, Sierra College. “The Sierra College Robotics Club team included one Computer Science major and two Mechatronics majors,” said Osladil. “During the three month period prior to competition, they worked very intensely over many evenings and weekends.” Mechatronics is a combination of mechanics, electronics, pneumatics, and hydraulics under computer control used in ATM’s, ski lifts, water treatment systems, medical lab equipment and automated manufacturing – as well as robots.

Josh Adriano led the firefighter robot team that included Patrick Leiser, who specialized in coding, and Sienna Fick, who focused on building and wiring electrical components. “I am so proud of our team; it feels amazing to take second place against seasoned teams who have been competing in this event for years,” said Adriano. “This was Sierra College’s first foray into autonomous robots. We had to build a robot that would think in a logical manner on its own rather than by remote control.”

The goal was to build a robot that could find and extinguish a candle, explained Adriano. “A candle was randomly placed in a room in a scale-model house,” said Adriano. “We had to design a robot and develop code so that it would methodically search all the rooms and extinguish the candle on its own. We chose a philosophy of wall hugging and always turning right as it scanned the room for fire. If it didn’t sense the candle, it backed out and continued searching. The robot also had to be able to tackle stairs and unexpected obstacles.”

Adriano designed the chassis and produced the majority of the parts in using Fusion 360 3D printers on campus and at Hacker Lab powered by Sierra College. “Everyone was so welcoming at Hacker Lab,” said Adriano. “When we had issues, we could consult with experts who gave us valuable input.”

The robotics club was supported by TSI Semiconductors in Roseville, according to Nancy Shafer, Senior Human Resources Representative. “The students gain practical hands-on experience as they design and build a competitive robot,” said Shafer. “TSI Semiconductors contributed financially to the club to promote technical education with highly relevant industrial application. The combination of classroom instruction coupled with hands-on trial and error is powerful. It’s a win-win outcome as we have hired many students from the Mechatronics program through the years.”

Competitions develop skills that will serve students in their careers, explained Osladil. “Students designed the firefighting robot using industry-applicable hardware such as sensors, microprocessors and motor controllers as well as innovative programming that applies to industrial and autonomous machines in the world at large,” said Osladil. “They also learn ‘soft skills’ such as teamwork, time management and budgeting.”

Graduates who can demonstrate these skills are in high demand with local manufacturers, according to Steve Dicus, Deputy Sector Navigator for Advanced Manufacturing for the California Community Colleges in the greater Sacramento region and housed at Sierra College, as well as the education committee chair for the Sacramento Valley Manufacturing Initiative (SVMI). “Community college students who have worked with a team to build a robot that competed successfully in an international competition have something relevant to share at an employment interview,” said Dicus. “The robotics competition enables Sierra College students to apply what they are learning and troubleshoot in real time. It is an excellent way for students to prepare for careers.”

Looking to the Future

According to Dicus, there are growing opportunities for skilled employees to work for manufacturers in the Sacramento region. “There are many career openings in product design, maintaining robotic equipment, engineering and fabricating products used in healthcare, aerospace, utilities and automotive industries as well as many familiar household products,” said Dicus.

The team already has plans for next year. “The Robotics Club is a welcoming bunch of people,” said Adriano. “I’d encourage other students to join – all majors are welcome to get involved. We are planning to compete in the autonomous robot competition again and the club participates in other events such as the Maker Faire in the Bay Area.” You can see the students’ robots at the Rocklin Mini Maker Faire on October 6, 2018 at Sierra College.