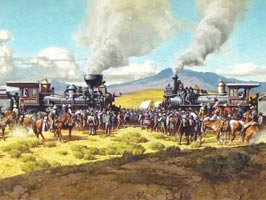 Celebration set for Saturday May 11th

Rocklin, CA- The public is invited to a celebration of the 150th anniversary of the completion of the Great Transcontinental Railroad.

The event will be held this Saturday, May 11, at the Rocklin Train Depot 3700 Rocklin Road. The 80 piece Rocklin High School Band under the direction of Thomas Douglass will kick off the event with a concert starting at 10:45 a.m.

A short program will begin at 11 a.m. with a bit about Rocklin’s contributions to the building and operation of the transcontinental railroad. Rocklin mayor Joe Patterson will assist in unveiling a granite plaque commemorating the Rocklin Depots the first of which was built in 1867. A special “postcard” will be available related to how Rocklin was named. The “Rail of Two Cities” model train layout, created by the Roseville Roundhouse Model Railroad Club, will be on display inside the depot waiting room from 10 a.m. to 2 p.m. At 11:45, immediately following the program, cookies and water will be provided by the Rocklin Historical Society members in period dress.

Also on Saturday, the public is invited to join the fun at the Kiwanis Rocklin Community Festival at Johnson-Springview Park – there, kids will be able to pull the whistle rope and bounce on the historical society Jubilee Train built for the 100th Anniversary of the transcontinental railroad.