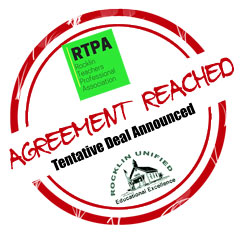 According the the RTPA post on social media, “The settlement negotiated 2017/2018 is a 1.95% increase to the salary schedules and extra duty stipends, such as sports, retro to July 2017 and $20 (2.5% increase) on the benefits cap retro to July 2017. Reaching this agreement could not have been done without the unity and support of our members and community.”  The post cited community support as an important factor in helping resolve  negotiations. (Negotiations on 2018/2019 are ongoing.)

The Rocklin Unified School District (RUSD) and Rocklin Teachers Professional
Association (RTPA) met on Tuesday, September 11, 2018. We are pleased to report, a
tentative salary agreement has been reached for 2017-2018 which means that a strike
has been averted for the 2017-18 negotiations.

The parties agreed to:
• 1.95% increase across all salary schedules and stipends in the contract
• $20/month increase on the health benefit cap

We continue to negotiate with RTPA and are committed to reaching a fair agreement for
2018-19.